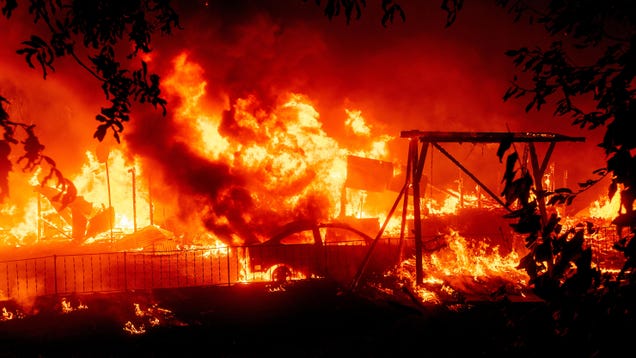 As Twitter goes through an upheaval and rumors of its potential demise – or probable malfunction – spread, millions of people are beginning to imagine a world without Twitter. While many people may think the platform has nothing to do with them, there are countless systems that have changed dramatically in the 16 years since Twitter’s inception, including emergency handling and disaster response, which is becoming all too crucial in the age of climate change. .

I called Samantha Montano, assistant professor of emergency management at the Massachusetts Maritime Academy and author of Catastrology: Dispatches from the front lines of the climate crisis, to talk about Twitter’s role in emergency management today and what could go wrong if the platform breaks or disappears for good.

Molly Taft, Earthling: How would you explain Twitter’s role in disaster response?

Samantha Montano: I think a good framing for this is that one of the most important things in a disaster response is communication and information sharing. It has to happen between many different people, many different groups of people, people who are not geographically close to each other. And it has to happen over a sometimes substantial period of time. And so, in emergency management, we have all kinds of different communication tools, networks and approaches. One of those tools is Twitter, and then social media more broadly.

Thinking of Twitter, you have a platform where basically anyone with internet access can create an account and share information for other people to see. Twitter is, in some ways, democratizing how people can share information in an emergency. This creates an opportunity for people who are part of the official response working in emergency management agencies and other response agencies to gather information from people from all of these backgrounds.

Montan: I think there are several things. One is how quickly information travels on Twitter. In a response, not only are you processing a lot of information, but you have to process a lot of information very quickly. And the way Twitter was designed, where, you know, you just type a few sentences and hit share, but there’s not the same level of effort for something like TikTok. It’s pretty quick, for better or worse. The second important thing, I think, is that the algorithm tends to push tweets up in a way that doesn’t happen, say, on Instagram, in a crisis.

Twitter is also a very searchable platform. Many other platforms, like Facebook, are not searchable like Twitter. When you search for information, you can type in that keyword and you can find other people talking about it, even without needing a specific hashtag.

Then the other thing that’s super, super fundamental is who’s actually on Twitter. You have a good chunk of first responder agencies, emergency management agencies, politicians, journalists, all kinds of scientists. Whether it’s an earthquake, hurricane or anything else, you can find an expert on the matter, people uniquely positioned to help explain what’s going on, to interpret what is happening and to be able to have official information and the power to share it. That part of who’s actually there is really important. If all of these people go and are on TikTok, maybe in some ways you can try to recreate that. But there’s this coming together of all these different factors that’s uniquely well-suited, in a way that no other social media platform even comes close.

Earth : To what extent do official mechanisms depend on this platform? Does it vary?

Montan: Yes, it certainly varies. Not every emergency management agency in the country is on Twitter. It is not necessarily a centerpiece of the operation of EMS agencies. Many of them pull information from Twitter in the middle of a reply; what we post may indicate how they react. It is a very important element. But in terms of the directionality of an EMS agency communicating with the public, a lot of them are going to release important response information, but just about any agency is going to have redundancies in how they communicate with the public . I would say it’s probably pretty rare for Twitter to be the only place an EMS agency tweets or posts vital information. They have other tools, in terms of other social media platforms they are on, sending out emergency alerts in various forms.

At the same time, one of the most important elements of emergency management is system redundancy. Twitter is certainly one of those redundancies. If Twitter went completely black, I don’t think an EM agency would be unable to communicate with the public. But that’s going to change and somehow get in the way of who they can reach.

Earth : What are your main concerns, if Twitter shuts down or is unusable for weeks or months, or permanently?

Montan: I would prioritize lifesaving things. I was share a lot of tweets that people have posted about those specific times when they heard about a wildfire or tornado and then took protective action because they saw it on Twitter. And it literally saved their lives right from the start.

Beyond that, there are so many ways Twitter influences the other things we do in emergency management. Non-profits and grassroots organizations – that’s how people get to know these groups, to know their work. That’s how we come to these assessments of organizations to donate to after a disaster. Sure, they have other ways of trying to raise funds, but especially the small self-help groups, it’s a really fundamental way that they share their information.

I think we’re really thinking about how this will affect Twitter specifically, but Twitter underpins a lot of the disaster content on these other social media platforms. Screenshots of tweets on Instagram and on TikTok during a disaster are from Twitter. It would also have some sort of ripple effect on other platforms, in a way that I’m not sure we’ve fully considered. More broadly, I’m a bit biased, and you will be too, but the impact of this on media coverage of the disaster, other than the life-saving story, is the part that worries me the most.

Earth : I worry about that too.

Montan: I don’t have good answers to that. Ten years ago, we depended on local journalism to fill these gaps. We don’t have it the same way anymore. There is so much turnover with journalists, in my experience, who cover disasters. It’s not like you can just rely on the contacts you already have. Twitter is where we very often learn that a disaster has happened. This is something that the general public really doesn’t understand – how much of the media coverage comes, in various forms, from Twitter. And I have no idea how to reproduce that.

This is very concerning, because we know from disaster research that media coverage is one of the key factors that determines everything from how much money people donate, to what whether people are volunteering, whether people know there is a disaster, whether you can get long-term support for reconstruction and recovery, whether you are successful in implementing mitigation projects in your community. Media coverage is a factor in all of them, and to see some sort of destabilization of that is concerning across the board, especially in the context of our heightened risk at this time.

Earth : You’re absolutely right that local journalism was in such a different situation when Twitter started than it is now.

Montan: Right. I also think that media coverage of disasters today is very different from 10, 15, 20 years ago, even from my perspective. We have been researching disasters in the United States since the 1950s. There are a handful of times a disaster researcher has been quoted in a story about an ongoing disaster. But there wasn’t even a group of people who were really questioned when disasters happened. And, now, we are a group. I think it has a very important value. There’s really important framing and analysis of why these disasters happen, and it helps to understand some of that big picture. And so it’s like, no, we can’t just go back to what it was like 20 years ago, because it didn’t exist.