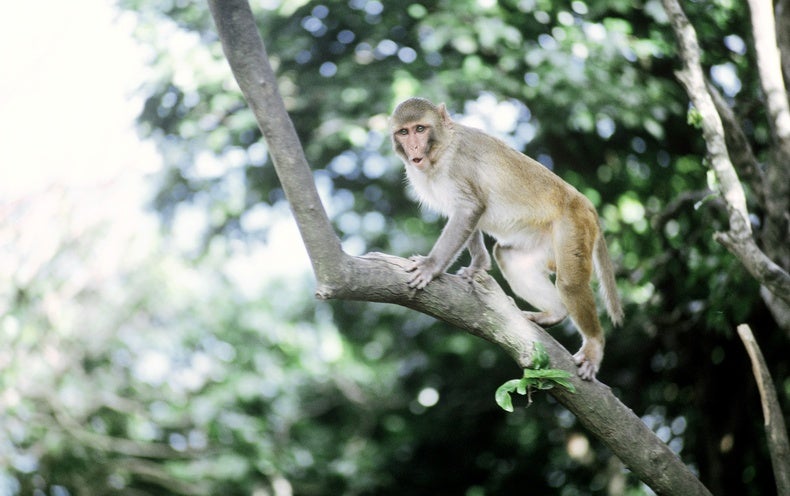 When Hurricane Maria slammed into Puerto Rico in September 2017, it claimed 3,000 lives and cut basic services to parts of the island for almost a year. The devastation was not limited to this island, however. Maria’s 155-mile-per-hour winds also tore through a 38-acre islet called Cayo Santiago that sits half a mile off the east coast of Puerto Rico. This small outpost is home to a colony of some 1,500 rhesus monkeys that have been the subject of hundreds of scientific studies, and the hurricane’s impact on the animals produces even more.

Amazingly, all of the monkeys survived Maria, although some died soon after. But their habitat has been devastated. Trees have been stripped of their leaves, making shade a scarce commodity, and the island’s temperature has risen by an average of eight degrees Celsius.

The scientific community immediately became concerned about the welfare of the monkeys. Guardians had to rush to replenish food and repair a destroyed water system. “It was a terrifying time,” recalls neuroscientist Michael Platt of the University of Pennsylvania, who co-leads a multidisciplinary team of researchers who have been tracking the biology and behavior of these monkeys for more than a decade.

Once the immediate crisis passed, however, scientists realized that the disaster had opened a door. “We had a golden opportunity to study the impact of a major natural disaster of the type that is becoming more and more common with climate change,” says Platt.

The findings of these studies continue to spread. An article published on February 7 in the Proceedings of the National Academy of Sciences of the United States shows how the calamitous disruption to the lives of Cayo Santiago macaques may have affected their immune systems so as to accelerate the aging process. Work suggests that storms such as Maria can also lead to premature aging in people who survive them.

A starting point for this new research on Maria’s impact on the island’s monkeys was actually human studies. Humans who survive trauma of all kinds, such as wars, often show chronic low-grade inflammationhigh rates of heart disease and other age-related conditions, says Marina Watowich, a graduate student in evolutionary biology at the University of Washington and lead author of the study. PNAS study. And for some types of traumatic stress, scientists have seen indices of molecular changes in cells that reflect accelerated aging. But no one had been able to document such changes in the context of natural disasters.

These researchers had access to a rare resource: blood samples from island monkeys taken before the disaster. Animals are sampled annually as part of a long-term study of how their genes interact with their social environment. Thus, the team was able to compare the blood of 435 rhesus macaques taken before the hurricane with the blood taken from 108 animals a year later. “You don’t usually have before and after samples for humans going through horrific events,” says behavioral ecologist Daniel Blumstein of the University of California, Los Angeles, who wasn’t involved in the study. . The information from these monkeys “presents an opportunity, and they really exploited it”.

Specifically, the researchers examined monkey immune cells, which are known to change with age in characteristic ways that can lead to chronic disease. The body’s stress response can also influence the immune system. So stressful experiences are thought to get “under the skin” and drive chronic disease through the immune system, says Watowich.

The researchers found that the monkeys that had endured the hurricane had, on average, a pattern of gene expression in their immune cells similar to that of the monkeys sampled before the hurricane that were two years older. “The average monkey is about two years old biologically, so that’s about eight years of human life, which is pretty grim,” Platt says.

The storm appeared to etch its greatest effects on so-called heat shock proteins, a class of proteins produced in response to stress that aid in the proper folding of other proteins. Blood samples taken from monkeys after the hurricane showed decreased gene expression for these proteins, a pattern that also occurs with aging. Decreased expression of heat shock protein genes in humans could increase the risk of diseases, such as Alzheimer’s disease, in which protein misfolding is involved, the researchers report in their paper.

The storm-stressed monkeys also showed signs of increased numbers of inflammatory immune cells and a relative decline in cells that suppress inflammation – changes the researchers also observed in older animals. Increased inflammation can drive or exacerbate many chronic diseases of aging, says Noah Snyder-Mackler, an evolutionary biologist at Arizona State University and lead author of the study.

The work could lead to clues about a mechanism that would explain the effects of natural disasters on disease and longevity. “If we’re able to show that there are these molecular changes, it allows us to identify some of the potential factors that could impact the onset and progression of age-related diseases,” Snyder says. -Mackler.

The molecular results are suggestive but not definitive, says epidemiologist Daniel Belsky of the Columbia Mailman School of Public Health, who was not involved in the study. “There is no gold standard measure of biological aging,” he says. But taken together, Belsky adds, the data points to an aging of animals in response to the hurricane.

This idea has important implications for public health, experts say. “Since we expect to see many more climate change-related disasters over the next century, quantifying the health costs of exposures will allow us to better estimate the consequences of these disasters on our societies and perhaps to intervene accordingly. proactively,” says evolutionary anthropologist Jenny. Tung from Duke University, who was not involved in the research. That toll, adds Belsky, can include a shortened lifespan and longer periods of disability.

Not all of the monkeys that survived the storm showed signs of accelerated aging. Snyder-Mackler and his distant colleagues are studying what might explain the resilience of some monkeys. One hypothesis is strong or numerous social ties. In 2021, a research team including Platt, Snyder-Mackler, and Watowich reported that macaques reached out and formed more social bonds in the aftermath of the storm, likely as a coping strategy. Social support is a known protective factor against stress in social species. Researchers now want to know if social bonds correlate with immune system resilience in macaques.

Another question, Tung says, concerns the potential long-term consequences of the molecular changes observed by the researchers. “Will the animals exposed to the hurricane actually live shorter than expected?” she asks.