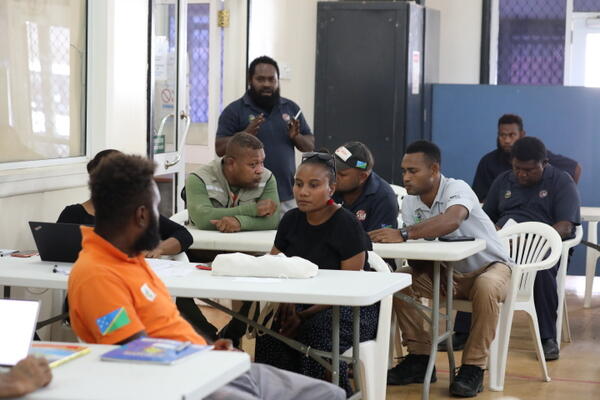 The tabletop exercise is the first step taken to gather information that will help a technical team revise the evacuation plan developed forty-seven years ago (1975) for the people of Savo if the volcano shows signs of collapse. a possible eruption.

The exercise was conducted by personnel from the ADF, the National Disaster Management Office (NDMO) and the Geology and Surveys Division of the Ministry of Mines and Energy. The tabletop exercise is the first step taken to gather information that will help a technical team revise the evacuation plan developed forty-seven years ago (1975) for the people of Savo if the volcano shows signs of collapse. a possible eruption.

Speaking at the opening of the workshop, the Deputy Technical Secretary of the Ministry of Environment, Disaster Management, Climate Change and Meteorology (MECDM), Mr. Channel Iroi, said that since the Global Risk Index released in 2021 showed that the Solomon Islands is ranked the 2nd most disaster-affected country. risk around the world, it is important that such measures are taken to try to mitigate the impacts of the various disasters to which the country is exposed.

He said that the recent disasters of the 2013 Santa Cruz earthquake and tsunami, the 2014 Honiara flash floods, the 2016 Makira earthquake and tsunami, the 2017 Tinakula volcanic eruption, the 2019 MV Solomon Trader oil spill disaster (maritime and environmental disaster) on Rennell, later MV Quebec Oil spill on Santa Cruz, the global COVID-19 pandemic and frequent riots are lived experiences that only confirm the Solomon Islands’ status as the second highest disaster risk country in the world.

Mr. Iroi said today that the dynamics of disasters are changing rapidly, therefore the government through the National Disaster Council (NDC) over the past 36 years since the establishment of the 1st Disaster Management Plan disasters, has endeavored and continues to explore, develop and implement disaster risk. resilience activities through NDMO, NDC/N-DOC sector committees and PDC/P-DOC sector committees. The 2018 disaster management plan currently in use is the 3rd in the country’s DMP after the 2010 one was revised and replaced.

“This is evidence of the changing dynamics of disaster management, where at the national level, the Solomon Islands Government and its disaster management stakeholders must continually be at the top of the game with an updated mechanism. preparedness, response, relief and recovery that would ensure that the current disaster management plan is executed effectively and efficiently,” Mr. Iroi said.

At a time when disasters are becoming more frequent and intense, countries like the Solomon Islands will rely heavily on foreign police and military resources to conduct response and relief operations. Therefore, the partnership of NDMO and RSIPF with the ADF in this tabletop exercise is very important given their roles in civil-military disaster coordination.

“The 2007 Western earthquake and tsunami and the Honiara flash flood relief and response operations were two of the major operations that highlighted the evidence and demonstrated the practicality of the need for civil-military coordination during disasters and collaborations in building capacity and capabilities in peacetime.Thus, the importance of this collaboration between the Australian Defense Force (ADF), the NDMO and RSIPF through this Savo Volcano HADR tabletop exercise”

Providing a summary of the idea behind the tabletop exercise, NDMO Deputy Director Mr. George Baragamu said it is the first time in 47 years that the country has taken the decision to review the evacuation plan. of the Savo volcano. He said that after the workshop, a technical working group will be set up with its terms of reference. The Technical Working Group will then begin work on reviewing the 1975 Savo Evacuation Plan using information from the tabletop exercise.

The workshop is attended by officers from the health, education, protection, livelihoods and infrastructure sectors.

Disclaimer: Solomon Times Online may edit or delete your comment and cannot guarantee that all submissions will be published or remain online. The comments expressed on these pages are those of the authors and do not necessarily reflect the official policy or position of Solomon Times Online.