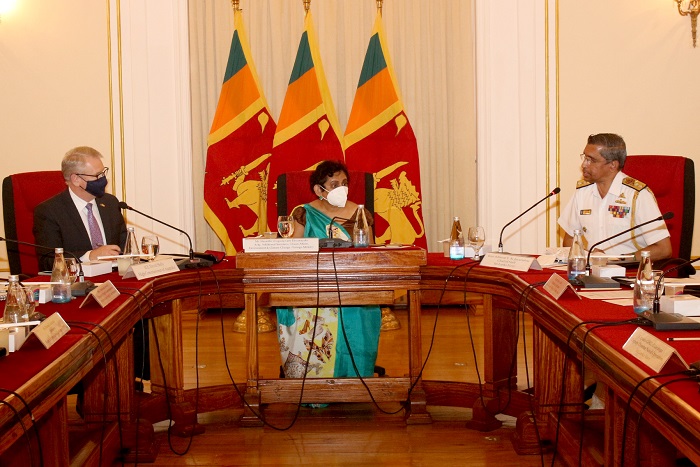 The Foreign Office said a discussion had recently taken place between the Maritime Affairs, Environment and Climate Change Division of the Foreign Office and the Australian High Commission to Sri Lanka and the Maldives.

The multi-stakeholder meeting held a discussion on international best practices, the application of the systems engineering model to work on Sri Lanka’s vision, mission and needs to establish a holistic and responsive maritime security authority. cutting edge technology.

The discussion was conducted to learn from Australia’s experience in dealing with maritime disasters, following the MV-X Press Pearl, which is considered the worst disaster of its kind that ended up polluting the ocean with a cargo containing large quantities of hazardous and harmful materials, chemicals and plastics.

Chairing the meeting, Actg. Additional Secretary, Ocean Affairs, Environment and Climate Change, Hasanthi Urugodawatte Dissanayake stressed that, if there is to be any upside to this incident, it would be in serving as a catalyst for building a more resilient system to prevent and respond. to maritime disasters in the future. This means prioritizing maritime emergency preparedness and management through the development of a maritime disaster preparedness plan, strengthening the institutional base for its implementation with adequate capacity building for the personnel of the relevant agencies.

Australia’s High Commissioner to Sri Lanka, David Holly, said that to achieve this, a collective initiative by the government of Sri Lanka and its international friends and partners is needed. He expressed his gratitude to the Government of Sri Lanka and in particular the Ministry of Foreign Affairs for coordinating this meeting, as such coordination is essential for a successful outcome. The High Commissioner went on to say that to ensure aid is delivered effectively, a mechanism must be in place to accept and facilitate international assistance to avoid duplication and that key gaps are not filled.

High Commissioner David Holly further pointed out that Australia’s approach to maritime disaster preparedness may not be best suited to Sri Lanka. However, His Excellency said the Australian government is ready to help Sri Lanka build its capacity to develop the most suitable system for Sri Lanka. The High Commissioner also pointed out that the presence of such a maritime disaster management entity in Sri Lanka could serve not only to deal with disasters in Sri Lankan waters and in the search and rescue region of Sri Lanka , but also to serve as a regional hub to complement other such entities in the Indian Ocean. .

Sri Lanka’s requirements for a maritime disaster preparedness mechanism/authority from a defense perspective were explained by the Chief of Staff of the Sri Lankan Navy Rear Admiral YN Jayarathna, while the requirements of conservation of Sri Lanka’s marine environment were explained by the Chairman of the Marine Environment Protection Authority (MEPA) Dharshani Lahadhapura, Nirmal Silva, Harbor Master of the Sri Lanka Ports Authority, made a brief presentation on the current process of removing the wreckage of the MV-X Press Pearl.

Australian High Commission Captain Ian Cain, Defense Adviser, delivered an insightful and informative presentation on the considerations for establishing a maritime disaster management authority in Sri Lanka, using the approach of systems engineering, as envisaged by Australia in the creation of its own agency, the Australian Maritime Safety Authority (AMSA). He further explained that the Australian model may not necessarily be the ideal system for Sri Lanka, but how a systems engineering approach would ensure that we focus on “needs” rather than “wants”. which would help us develop a system based on our current capabilities and resources.

The Ministry of Foreign Affairs developed an initial working draft for a maritime disaster preparedness mechanism for Sri Lanka in September 2021 and handed over the process to the Ministry of Ports and Shipping, which leads the committee set up to develop said mechanism. . The Committee is currently refining the mechanism with relevant stakeholders. The Department of Foreign Affairs is also working with stakeholders to bring the issue of marine pollution and immediate recovery to the global level, especially caused by plastic nurdles. (NewsWire)