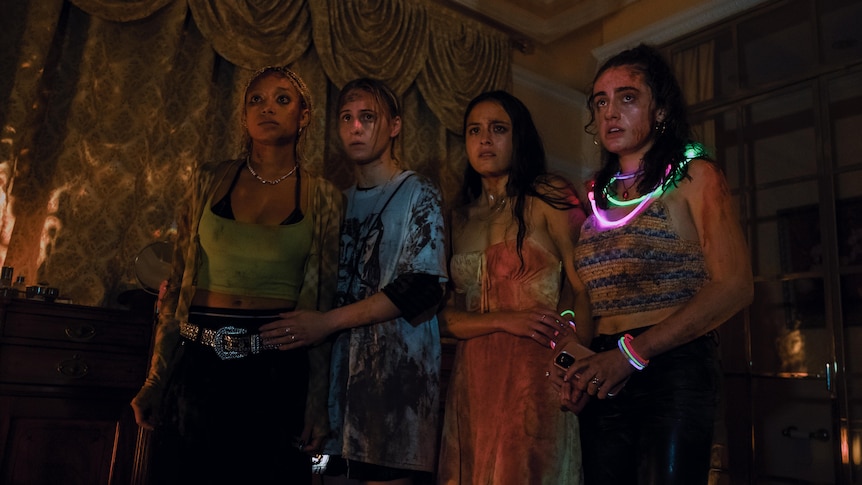 What happens to a bunch of rich, bored, vapid Z-ers/millennials locked in a McMansion during hurricane season when the wi-fi goes out?

If the movie Bodies Bodies Bodies is anything to go by, they’ll probably end up killing each other – unless someone else does it first.

But before long, real bodies start coming up, and they must find out who the killer is.

Bulgarian actress Maria Bakalova plays the protagonist Bee, a foreigner and the new girlfriend of one of the band members.

Speaking to ABC News from New York, she says the lack of trust between the supposedly close-knit group of friends propels the story.

“You’re dealing with your little issues: did you text him or you don’t like my podcast or my parents aren’t upper class,” she says.

“All those little non-life-threatening issues in a time when you supposedly need to protect yourself and your loved ones from a potential killer or natural disaster.

“That’s the fun part [is] that you get people [that worry about] so many little things instead of the big picture, which is scary. So it gets funny.”

“The biggest monster is within us”

As the group of twenty-somethings races to uncover the murderer among them, they also grapple with social issues such as performative alliance and culture cancellation.

Terrified and covered in blood, they still manage to hurl insults at each other, like “You’re triggering me”, “You’re so toxic” and “You hate-listen to his podcast”.

“The biggest monster in this movie is kind of inside us in every character,” says Bakalova, who is best known for her role as Borat’s daughter Tutar in Borat: The Next Movie.

“It’s not so much the hurricane, even the wi-fi. It’s what happens inside of us when these circumstances happen around us.

“Who are we really, in the dark?

The film asks if the anxiety around these issues is cross-generational, as the characters mask their feelings by communicating through screens, using GIFs, memes, and stickers to convey emotions.

“Am I Gen Z? Am I a millennial? I think all generations are pretty glued to their phones,” Bakalova says.

“I do not think so [technology is] necessarily a bad thing as long as you know how to use it correctly, but it definitely shapes our lives in a way that changes the communication between us.

“We kind of put a boundary between us and it’s harder to communicate and develop a real relationship, to build trust with someone.

“And that’s what we’ve witnessed with these people who are in this nightmare.

“It’s probably the first time they’ve actually communicated with each other in years.”

“Art is pretty much a reflection of the life we ​​live,” she says.

“And so many times, life copies art… And I think it’s important to hear all the different voices.”

The dark comedy-thriller-slasher will be released in Australia on September 15.