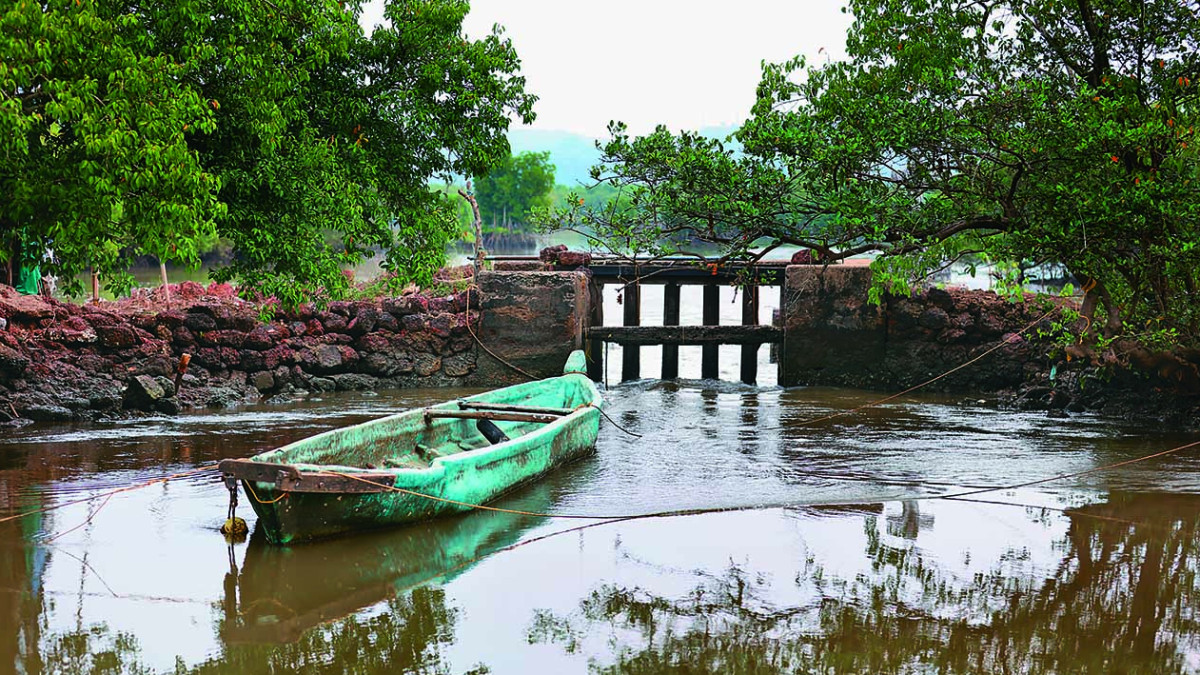 The coastal regions of the world are eco-fragile systems as they incorporate complex processes such as tidal systems, offshore currents, waves, erosion, accretion, beaches, dunes, wetlands, the tidal channels. Due to the global impact of climate change, the United Nations Framework Convention on Climate Change (UNFCCC) strongly drives nations to initiate action plans for sustainable development. In Asia, sea level rise is considered one of the most serious threats. Goa has 105 km of seafront along the Konkan coast in southwestern India. Goa’s lowest land is only known as khazan ecosystem. They are terrestrial subsistence systems traditionally developed by local communities through experiential learning over thousands of years. The land, which was once flood plains at low tide, has been intricately designed with dykes, sluices and water channels. The traditional occupations supported were agriculture, aquaculture and salt production. Indigenous village communities, also called Gaunkari (common resource) villagers or co-owners, maintained these khazan infrastructure for their annual food production. Socially, economically and ecologically integrated into their way of life, these khazans are the cultural landscape of the villages of Goa. Today, these existing ecosystems additionally have an inherent potential to withstand sea level rise or flooding and other coastal hazards associated with climate change. Currently, events such as tides whose amplitude extends up to 2.5 m, and daily heavy rainfall of 0.3 m occur simultaneously, with a gradual rise in sea level, the total rise water levels easily reaching three meters. Khazan Ecosystems and their potential to defend against coastal hazards can provide a base map to authorities for disaster management in Goa.

What is the scope of this study?

Considering climate change, the risk of sea level rise, what is the defense capacity of khazan ecosystems, the extent of khazans affected in the most vulnerable areas of Goa taluka? Which governance systems need local attention? Finally, what are the resilience measures that require urgent reflection? All of this involves understanding a centuries-old vernacular system. Its conception, evolution and management must be underlined. Spatial analysis makes it possible to establish topographic modeling to identify areas at risk. Ground truthing data can corroborate physical condition to prioritize courses of action.

According to research available on khazans by prominent local researchers, it is amply clear that ecosystems had specific components that were commonly present in all khazan Locations. Since reclaiming the lowlands involves draining them for productive purposes, the khazan infrastructure has been built to protect the land from salt water infiltration and to regulate it during drainage. Thus, dykes (locally called dykes), locks (locally called Manos) and networks of water bodies (locally called poems) were established in each range of khazans that are found along rivers or their tributaries. These systems are worthy of GIAHS (Globally Important Agricultural Heritage Systems) status. The digital elevation of these areas reveals that most of them are less than 5 m above sea level. The estimated extent of khazans across Goa is 18,500 hectares (185 km2). Half of this is in Tiswadi, the smaller taluka from North Goa. The coastal talukas of Tiswadi, Bardez and Salcete comprise the majority of khazan land along the coast of Goa. This corroborates the fact that these three talukas are listed as the most vulnerable and have the most dykes built in their territories to protect their land. Dyke records available in Goa Government Notifications show around 500 dykes across Goa, of which 300 are in these three vulnerable areas talukas. Traditional knowledge and vernacular methods have been adopted by ancestral communities to build these systems bit by bit through intensive manual labor and experiential learning. The communities have maintained themselves in an integrated way with nature and both have thrived. Considering technology, scale of work, management practices, etc., these ecosystems seem like ancient, hand-crafted marvels. The earth inside these khazan the expanse is quite low and must therefore be protected from flooding by the dykes, which are found along the outer water bodies. They are therefore mainly defense systems necessary to protect the land against flooding. Local communities are in full agreement with the reality of climate change, the risk of sea level rise and the fact that water levels have risen over the years. They also know that the existing khazan infrastructure is all they need to manage a flood. The khazans were primarily designed as a defense for livelihoods through land management and therefore have the built-in capability to defend against sea level rise.

Goa has tourism potential throughout its landscape, including its Khazans. Sustainable practices as well as traditional knowledge are the way forward.

What are the resilient choices?

On-site observation of each component of a khazan The ecosystem reveals that they were built with sustainable materials like silt/clay, hay, wood, bamboo, etc. The management systems built around these were intended for 24-hour monitoring and maintenance. As these were community ‘common resources’, the maintenance of these systems affected everyone’s livelihoods and was therefore considered a high priority. However, their state of deterioration indicates various factors such as management failure, changes in administrative status and ownership, land use and demography; promulgation of new land laws, unavailability of qualified local workers and indifference of village communities. The advent of cement has also forced its unsustainable use in many khazans, which not only present structural problems in aquatic areas, but also cause pollution, damage to biodiversity and aesthetic stresses on the cultural landscape. It will be a slap in the face of our ancestors if tomorrow we replace Goa’s 500 seawalls with concrete, to pretend we are defending ourselves from rising sea levels, while killing reason itself – sustainability – they have survived so many years. The hard work and sweat of their hands will be turned into waste.

Can the khazans be the green corridors?

Goa has tourism potential throughout its landscape. Khazan ecosystems are no different. Sustainable practices coupled with traditional knowledge are the way forward. Why would anyone be interested in seeing an age-old system converted to concrete? Instead, if these systems add value by becoming green corridors across Goa, it would be a wonderful feat whose showcase could attract tourists. There is enough green knowledge expertise and technology to support and convert these spaces to not only support the professional potential of the inhabitants, but also to add tourism potential for their livelihood. Why wouldn’t a visitor be interested in seeing how the ancestors of Goa planned their lives and livelihoods, and more so, how today’s communities have transitioned with a whole new approach. In a decade devoted to achieving global Sustainable Development Goals, we must step through the comfort zones of our ivory tower and get out into the field to experience how nature designs its systems of sustainable way. Khazans are uniquely able to defend against floods and can be the green corridors of Goa.

(This appeared in the print edition as “The Green Corridors”)

Elsa Fernandes is an environmental architect based in Goa