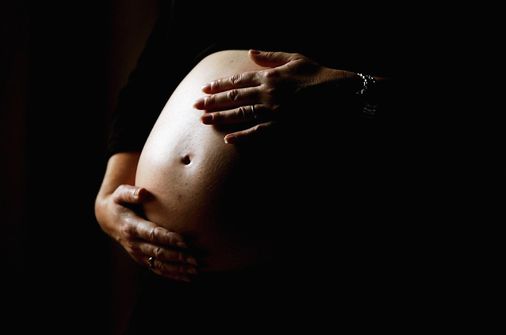 The findings, published in the Journal of Child Psychology and Psychiatry Wednesday, show that children who were in the womb during the devastating Sandy storm of 2012 had a “significantly increased risk” of developing depression and anxiety, as well as attention deficit and cognitive disorders. disruptive behavior in early childhood.

Scientists have long known that maternal stress during pregnancy can threaten a child’s mental health, said Yoko Nomura, professor of psychology at CUNY Graduate Center and Queens College in New York, who led the study. Still, she says, she found the results “alarming.

“I was really surprised,” she said.

Hurricane Sandy was a powerful fueled by climate change storm that devastated Jamaica and parts of Latin America before heading north and hitting the east coast of the United States. The storm killed 44 people in New York and inflicted damage estimated at $19 billion.

Nomura was leading a study in New York on the effects of psychosocial stress during pregnancy when the storm hit. She knew then that she had to investigate Sandy’s implications, so she quickly pivoted.

For the report, Nomura and other researchers from the City University of New York Graduate Center and the Icahn School of Medicine at Mount Sinai analyzed 163 preschoolers in New York City. whose mothers had lived in New York neighborhoods that Sandy particularly affected. The researchers reviewed the children’s medical records and surveyed their parents every year after the storm. Sixty-six of the children were in the womb during the hurricane; the remaining 97 were born before the storm or were not yet conceived.

Each of the children’s 163 parents suffered some form of trauma from Sandy, Nomura said. Half were forced to evacuate in the storm’s wake, and another tenth were evacuated before it landed. The other participants opened their homes to other people displaced by the storm. Participants detailed other stressors such as damage to their homes and neighborhoods, problems with insurance companies, power outages and weeks of lost income as a result of the storm.

The differences were striking. Fifty-three percent of children exposed to Hurricane Sandy while in the womb showed clear signs of an anxiety disorder, compared to just 22 percent of children who weren’t. And about 30% of the exposed group were tested for attention deficit or disruptive behavioral disorders, compared to just over 8% of those who weren’t.

A confusing result of the new study: mental disorders vary according to biological sex. Specifically, the researchers found that girls exposed to Sandy had a much higher risk of developing anxiety disorders, while exposed boys had an increased risk of attention deficit and disruptive behavior disorders.

The new research is part of a growing body of work on the risks the climate crisis poses to fetuses and pregnant women. A 2019 article revealed that pregnancy complications increased by nearly 17% shortly after Sandy, with the biggest increases among uninsured and people of color. Other recent studies have also linked extreme heat to Gestational Diabetes, premature birthand increased rates of stillbirth and low birth weight. And last summer the American College of Obstetricians and Gynecologists issued directives on the link between extreme temperatures and irregular births.

New research also highlights the effects of climate change on mental health. In February, a landmark report from the world’s largest climate science body highlighted this toll for the first time, predicting rising levels of anxiety and stress as the planet continues to warm.

Ari Bernstein, a Boston-based pediatrician who directs Harvard University’s Center for Climate, Health and the Global Environment and who did not work on the paper, said the new study advances those findings.

“We strangely think that disasters caused by climate change only matter when they happen,” he said. “These results provide a severe correction to this erroneous belief.”

In some ways, the new report raises as many questions as it answers. It cannot disentangle a causal link between fetal hurricane exposure and mental health issues, Nomura said. It cannot determine whether the results can be extrapolated to other natural disasters. And, crucially, it does not explain the mechanisms behind its own results.

“What’s most disconcerting about this, what remains unanswered in the study, is the ‘why,'” said Dr. Jeffrey Newcorn, director of ADHD, Learning Disabilities and related disorders at the Icahn School of Medicine at Mount Sinai and a study co-author, said. “Why is this happening? What are the mechanisms by which this type of stress exposure produces these kinds of results? What can we do to mitigate this?” These questions are all still left open.

But the study is a window into the weird and frightening ways climate disasters can threaten well-being, which is especially important as disasters become more frequent and severe as the planet warms.

Newcorn said he hopes the work will spur more research — and funding for research — into how climate-related events exacerbate prenatal maternal stress.

And Amruta Nori-Sarma, an assistant professor in the department of environmental health at the Boston University School of Public Health, who did not work on the study, said she hopes it will further spur help for at-risk populations. .

“The study demonstrates the need to provide additional services to vulnerable populations when extreme weather conditions are forecast, including services targeting pregnant women and newborns,” she said.

The findings come amid growing concern about the impact of climate disasters on the mental health of young people. On Thursday morning, advocates from the advocacy organization Clean Air Force Moms joined federal officials and youth organizers for a press conference the approval of a federal law proposal to increase resource funding to support the mental health of young people affected by climate change.

Yet “the lifelong consequences of negative experiences in utero are often underestimated,” Taylor Morris, senior researcher at the Health Policy Partnership, who has writing about the risks climate change poses to fetal health and did not work on the study. She hopes the study will help change that, she said.