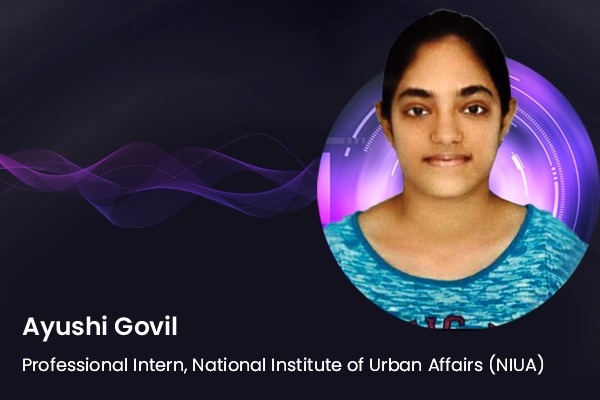 As India is vulnerable to a wide range of natural disasters, the country has also experienced a significant number of natural disasters over the past 20 years (2000-2019), especially floods (52%), cyclones (30% ), droughts (3%), earthquakes (5%) and landslides (10%). Comparison of data on disasters from 1981-1999 to 2000-2019, indicates that the occurrences of disasters increased from 240 to 321 with substantial financial and material losses. The map illustrates the disasters facing cities, which are mainly floods, cyclones, landslides, etc. Cities are the engine of growth in India, given that around 35% of India’s population now resides in urban areas, there is a need to focus on disaster risk reduction in Indian cities. The urban population currently contributes around 63 percent of India’s GDP and is expected to reach 75 percent, according to a joint report by CBRE and CREDAI. By 2030, when the SDGs are assessed, nearly 400 million people will reside in Indian cities. Thus, cities can be seen as units vulnerable to disaster risk. Multiple increases in population growth, safe urbanization and migration to cities expose more people to high-risk areas.

Sendai framework and its link to the SDGs

For effective DRR in India, a 2005 Disaster Management Act (DMA 2005) was enacted with an effective response mechanism through the National Disaster Management Authority (NDMA), various committees that enacted it. depend on and structure at state and district level. However, considering the growing contribution of urban areas to the country’s GDP, and at the same time the losses suffered due to the threat of disasters such as urban floods, heatstroke, cyclones, etc. and certain man-made disasters affecting critical infrastructure in cities; Indian city resilience through city-level disaster management preparedness is needed.

City-level disaster management planning through their provisions in master plans and disaster-resilient reconstruction of critical infrastructure can serve as a major tool to achieve SDG target 11.5 and contribute to a more sustainable future for all. .

When a city is faced with a natural disaster, the main focus is on responses to minimize losses and protect those most affected. In any city, the low-lying areas where squatters thrive are directly exposed to flooding. Development along the flood plains in an uninformed manner and with makeshift materials results in loss of life and people losing their homes with recurrent flooding, which is never counted.

Likewise, areas that are generally prone to landslide hazards are at the base or top of a steep slope and old fill slope, in or at the base of minor drainage pits, on d ‘old existing landslides. To mitigate the significant impact of a landslide, construction should be avoided near steep slopes, near mountain edges, near drainage routes or valleys of natural erosion, and an assessment of the terrain of all property must be carried out exhaustively. In addition, the occurrence of earthquakes in steep areas prone to landslides greatly increases the likelihood of devastating mudslides and the reactivation of mass movements on the slopes. Large embankments can become unstable due to moderate seismic activity if proper lateral support is not provided. 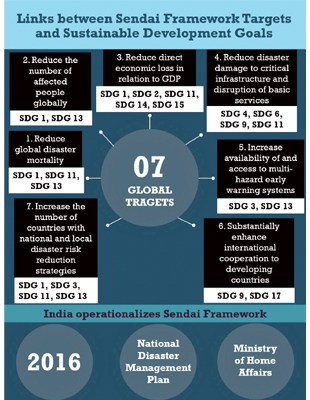 Alignment of the Sendai framework with various SDGs

Hydrological disasters (droughts and floods) account for the bulk (55%) of total natural events and take a heavy toll on the vulnerable part of society in Indian cities. They are also specifically part of SDG 11.5. Hunger, poverty, epidemics and malnutrition, widespread agricultural failures, loss of livestock and water shortages intensify the threat of disaster risk. Therefore, alongside regional disaster management planning, city-wide planning is also strongly recommended.

Two metropolitan cities in India, Kolkata and Chennai, have taken an important step in developing the City’s Disaster Management Plan (CDMP). These CDMPs were prepared on the basis of the guidelines of the National Disaster Management Plan (NDMP) and the National Disaster Management Plan (SDMP). The plans take into account the vulnerabilities of the city’s geography, demography, history of disasters and its social and environmental aspects. The systemic interconnection of geographic contexts and GDP impacts must be taken into consideration to effectively monitor and strengthen disaster risk reduction. The CDMP should be revised annually, based on needs and past experience.

â— A coordination meeting related to monsoon activity throughout the monsoon season should be organized at all levels of the organization.

â— This plan encourages a paradigm shift from a relief-centric approach to an integrated approach to pre-during-post-disaster management.

â— This plan takes into account the vulnerabilities of Chennai and its districts according to their geography, their demography, their past disaster and their social and environmental aspects.

â— The Greater Chennai Corporation’s (GCC) plan mainly focuses on coordinating with the metrology department and the Indian National Ocean Information Services Center (INCOIS) to get the warning report and alerts.

â— An early warning system for disasters with very high frequency equipment and sound systems with sirens, aimed at the public by air.

â— GCC has set up 24-hour helplines for individual complaints at headquarters in each of the 15 zones.

The CDMP has been largely aligned with the goals and priorities set in the Sendai framework of DRR and SDGs. 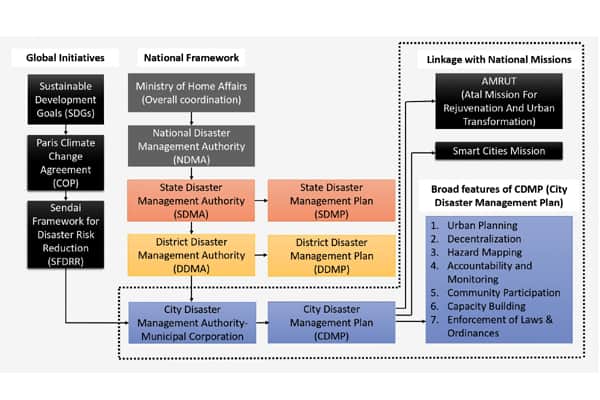 The way forward for Indian cities Rapid urbanization is leading to threatening decline of ecosystems, which impacts the resilience of cities. A paradigm shift from the response approach to a comprehensive risk mitigation approach needs to be embraced by Indian cities. The framework, mechanism and funding are currently limited to response and not risk reduction. The following figure describes a general framework, potential avenues and key characteristics that cities can adopt to prepare a city disaster management plan.

The following actions are recommended to protect Indian cities from disasters:

â— It is strongly encouraged to safeguard natural buffer zones to improve the protective functions of ecosystems.

â— Planning decisions and processes are currently based on political economy and / or ease of engineering. Building regulations are often limited to a few risks such as earthquakes which only account for five percent of total disasters in India. Others, such as cyclones, droughts and floods, which constitute the largest 95%, are still not taken into account. Thus, a multi-risk approach must be put into practice.

â— An essential component of the disaster resilience governance framework must be the capacity to support services and housing for marginalized communities and vulnerable populations in cities.