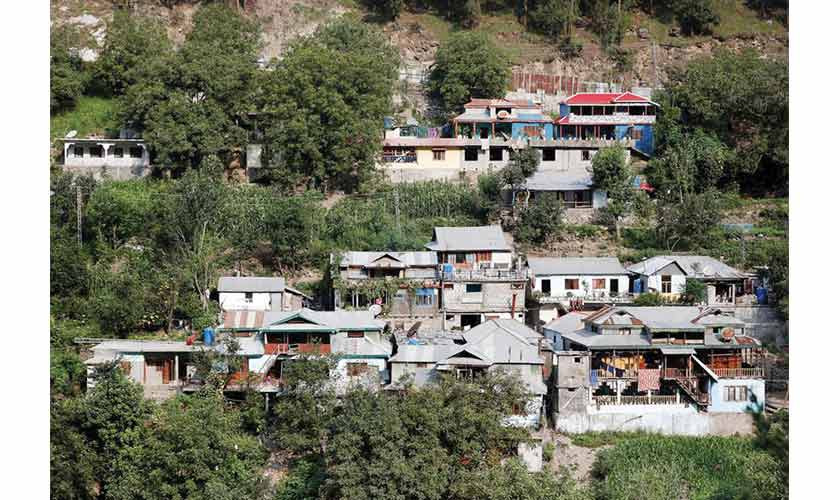 zad Jammu and Kashmir (AJK) has been in the grip of relentless monsoon rains since early July causing damage to life and property. Heavy rains and flooding have left a trail of destruction in the region.

A cloud burst in Dawarian village in Ratti Gali, Neelam district caused flash flooding in Dawarian nullah on August 16th. This resulted in colossal damage to the area. The flash flood partially damaged four houses, four shops, four vehicles, four motorcycles and four hydroelectric plants. More than two kilometers of road were washed away in different places. As a result, hundreds of tourists found themselves stranded.

The situation compelled the District Disaster Management Authority (DDMA), Rescue Unit 1122, District Administration, Civil Defense, Police and Civil Society to launch a joint rescue operation which lasted until 11 p.m. The National Disaster Management Authority (SDMA) has also dispatched an operations team carrying medicine, food and other needed items to the affected area. First aid was immediately given to the injured. More than 250 stranded tourists have been moved to safe guesthouses. The road leading to Ratti Gali remained blocked. In many cases, local volunteers reached flood-affected areas before the authorities.

On July 31, in Tahi Khakhriyali village of Hajira subdivision in Poonch district, the roof of a mud house collapsed, killing 10 people and injuring four. Deputy Commissioner Hajira Waleed Anwar said heavy rains over the past few days had left many homes vulnerable. Fourteen people, including seven children, were buried under the rubble of the house. Villagers rushed to the scene and recovered seven bodies and the injured from the site. The survivors were taken to a private hospital in Tatta Pani. Ansar Yaqoob, Poonch’s divisional commissioner, handed over four million rupees to the bereaved family. He also delivered tents, sheets, blankets and food.

A one-year-old girl died on August 22 in Bandian Dahmal ward of Kotli district of Chidhui in a roof collapse. The rest of the family was rescued alive from under the rubble. It is feared that similar incidents in remote areas go unreported. There have been complaints in various areas about the unavailability of lifesaving equipment. Whenever a calamity strikes AJK, especially in remote areas, it takes considerable time for rescue teams to reach the affected areas. The resulting loss of life highlights the need for a change in approach to disaster management.

Heavy rains in AJK have also caused the Azad Pattan road, which connects Poonch division to Rawalpindi district, to collapse several times during the ongoing monsoon. The rainfall also caused landslides in the area. Such incidents lead to road closures, leaving traffic suspended and people stranded for hours. Since this road directly connects Punjab with the AJK, its closure has caused difficulties in the transportation of people and goods.

Mobile phone networks and internet services were frequently disrupted in the region. The Special Communications Organization (SCO) provides internet and telephone services in areas near the Line of Control (LoC). Other cell phone networks are not allowed to run services due to the heavy presence of the Indian Army in occupied Jammu and Kashmir. This makes it even more difficult to communicate with families or loved ones in times of difficulty.

The AJK is very vulnerable to natural disasters. These have a devastating impact not only on people and communities, but also on the economy. Persistent rains have hurt the region’s economy. The tourism industry has suffered a severe blow as people no longer visit the northern regions due to flooding. Razzaq Khan, owner of a hotel in Rawalakot, says he has received fewer tourists this year due to flooding, unexpected weather conditions and the extended monsoon season.

The impacts of these climatic disasters affect men and women differently. Amna Bibi, a resident of Neelum Valley, says she and her two daughters do not feel safe when it comes to personal safety in emergency shelters. She says it will be difficult for them to recover from the aftermath of the floods. Her eldest daughter, Zunaira, fears she won’t be able to go to school for a long time. They say proper medical care is not assured. There is also a lack of proper sanitation measures.

According to the SDMA and the AJK government, 37 people died, 20 were injured, 252 houses were destroyed, 17 shops were damaged, 762 livestock perished and 114 houses were partially damaged in the past two months. . Other losses include damage to 52 motorbikes, a primary school, two guest houses, three watermills and five hydroelectric power stations. A network station was partially damaged.

With the increasing likelihood of cloud bursts and melting glaciers, there is a need to prioritize institutions responsible for disaster prevention, management and rehabilitation for resource allocation and development. It seems that the AJK disaster management authorities and the district-level disaster management authorities lack adequate resources to meet these daunting challenges. Civil society and community organizations should be involved in disaster prevention and management efforts and in anticipating disasters.

The author is a freelance contributor based in Rawalakot, AJ&K. She tweets @hunain_mahmood and can be reached at [email protected]