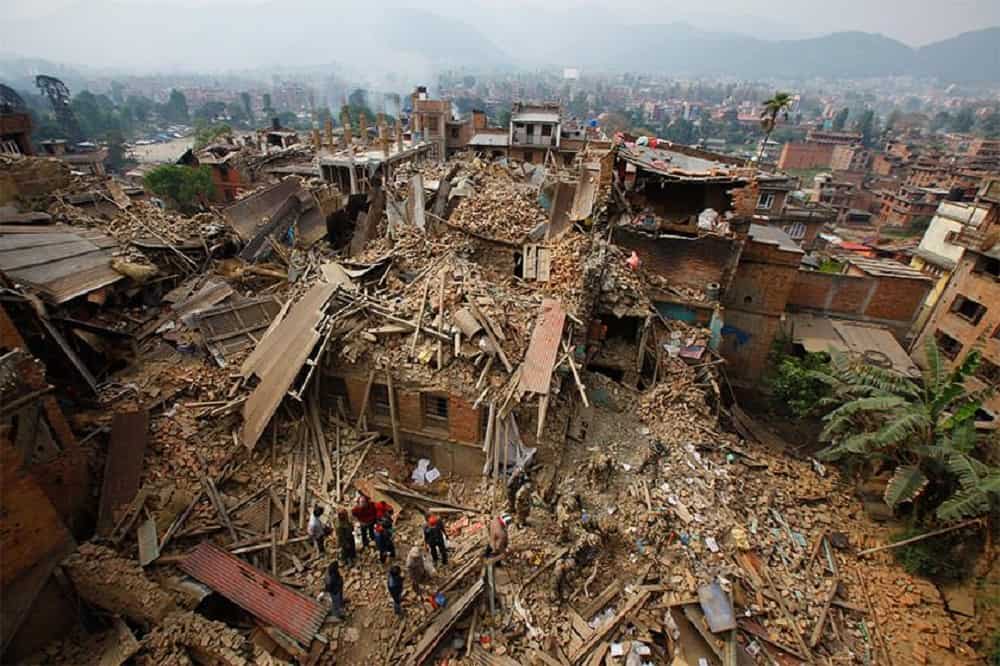 Wednesday October 13 marks the International Day for Natural Disaster Reduction. While many countries have made progress in reducing or at least controlling natural disasters, the Iranian people under the mullahs’ rule have become a massive victim of natural disasters.

The International Day for Natural Disaster Reduction was an opportunity for States to focus on their efforts and demonstrate competence in showing how far they have come in dealing with natural disasters and reducing the number of victims. .

For example, last Thursday, Tokyo suffered a powerful 6.1 magnitude earthquake. Videos on social media have shown moments from this powerful earthquake, but reports say the quake caused only short power outages in Tokyo. On October 9, a magnitude 5.7 earthquake rocked Andika County in Iran. According to Iranian state media, at least 11 villages were destroyed and a dozen people were injured.

WATCH: A 6.1 magnitude earthquake struck Thursday near Tokyo, shaking parts of the capital the most since its disaster in March 2011.

Rail services were disrupted and electricity briefly cut off in parts of the capital, while injuries were reported https://t.co/571rnFkv4J pic.twitter.com/DuL0cla5OL

Yet Iranian state media reported on Tuesday that the regime has so far failed to help residents of Andika, in Khuzestan province, southwest Iran.

â€œAid to the earthquake-stricken areas in eastern Khuzestan is progressing slowly. Out of 600 villages in Andika, 330 villages suffered heavy damage and 30 villages were 80 to 90 percent destroyed, â€the official Vatan-e Emrooz wrote on Tuesday.

â€œMany houses have been destroyed, and on the other hand, as the roads are blocked, the process of rescuing the inhabitants of this area is difficult. The conditions of the victims of the earthquake in this province are unfavorable due to the destruction of the stone and wooden houses, â€added the daily.

Amid coronavirus, floods in Iran are killing dozens; The regime took no action

There are several major faults active across Iran. Iran also sits on two major tectonic plates and is subject to frequent seismic activity.

â€œIf an earthquake as powerful as the one in Kermanshah province occurs in Tehran, 200,000 buildings will be totally destroyed and will collapse. The collapse of these many buildings will certainly cause a million victims, a real disaster indeed, â€said Ali Beiollahi, former director of the earthquake research department at the Ministry of Roads, Housing and Urban Development. plan in 2017.

In 2017, a powerful 7.3 magnitude earthquake rocked Kermanshah in northwestern Iran. More than 600 people were killed, 70,000 people became homeless and many lived in tents for more than a year and a half. Yet former regime president Hassan Rouhani then falsely claimed that â€œalmost everyoneâ€ has returned to homes that have been rebuilt or repaired.

According to the IRNA news agency on November 27, 2018, many people still lack basic shelter, even though the city streets are full of rain and mud which “entered the tents of the earthquake victims. “, And that the residents are trying to reverse the situation by” using plastic sheeting and digging water channels. ” Worse yet, another 6.3 magnitude earthquake was recorded in November 2018 in Kermanshah, injuring more people and destroying more homes.

Another magnitude of 5.9 rocked the province of East Azerbaijan in northwestern Iran. Five people were killed and at least 520 people were injured. Once again, the regime delayed aid to residents, and many people have not recovered from this earthquake, even after two years.

Mrs. Maryam Rajavi, the president-elect of the NCRI, then urged people to help the victims. â€œThe mullahs’ regime is covering the damage caused by the magnitude 5.7 earthquake in West Azerbaijan. More than 100 villages were damaged. I ask for help for those affected, especially in Khoy and Salmas, and call for the vigilance of my compatriots in the province in the face of subsequent aftershocks, â€she said.

Most earthquake deaths and extensive property damage are the result of collapsing buildings. The regime could reduce the number of casualties by using modern building codes and progressive engineering methods. It could also reduce risk by strengthening public infrastructure. Public infrastructure in Iran is very vulnerable after decades of underinvestment. The so-called â€œMehr housesâ€ quickly collapsed in the Kermanshah earthquake, and many people died under the rubble.

The plan could have helped people if it had an effective provincial emergency response system. And finally, countries vulnerable to major earthquakes, such as Iran, must invest in research to improve their knowledge of the hazard, potential impacts and seismic safety. Investing in science and research will provide the knowledge needed to support effective actions by policy makers.

Instead, the regime wasted national wealth on terrorism and other malicious activities. In 2019, the US State Department estimated that Tehran was paying $ 700 million a year just to the Hezbollah terrorist group in Lebanon.

According to a US State Department report, â€œIran has been one of Bashar al-Assad’s most trusted partners, providing nearly $ 5 billion in lines of credit to the Syrian regime and injecting resources and resources. military personnel in the region â€.

The export of terrorism is an inseparable part of this regime as it must export chaos beyond the Iranian border in order to survive. Thus, it is futile to wait for the regime to control and reduce natural disasters and their impacts.

On the International Day for Natural Disaster Reduction, the world community should know that under the reign of the mullahs, every natural calamity and every preventable problem, from COVID-19 to floods to earthquakes, happened. turn into a major disaster. In other words, as long as the mullahs are in power in Iran, natural disasters would seriously damage the lives of the Iranian people.