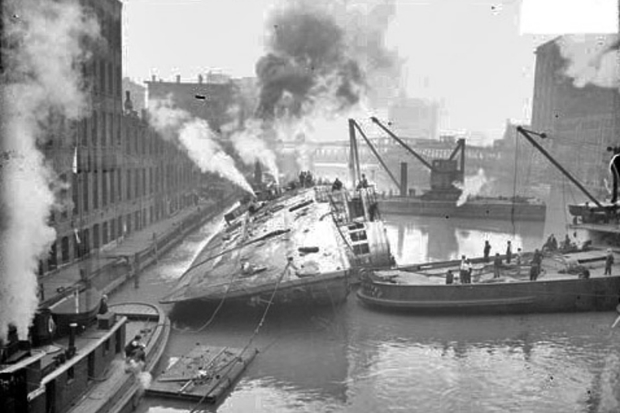 The Historical Society is hosting a Chicago River Cruise as part of its weekend of events to commemorate the 100th anniversary from the sinking of the Eastland. Participants will embark on a Wendella boats cruise to the exact spot between LaSalle and Clark streets where the convict Eastland’s passengers boarded, according to the company.

The boat will then follow the path the Eastland would have – if it hadn’t, you know, sunk – and descend the Chicago River before ending where it started.

Kelly Bauer explains what the Saturday cruise will be:

In case you’re superstitious, the company event notes that “the safety and security of passengers is of paramount importance” to the group and Wendella.

The Eastland sank on July 24, 1915, while moored at a dock on the Chicago River with more than 2,500 passengers and crew on board, according to the company. The ship tipped over (or “listed”), filled with water and sank to the bottom of the river, killing 844 people who were trapped inside.

The passengers were Western Electric employees and their families who were taking Eastland on a corporate excursion. Twenty-two families were killed in the disaster.

A cruise to commemorate the sinking of a ship is not unheard of, although it may raise eyebrows: the Titanic II, a replica of the famous â€œunsinkableâ€ ship but with more lifeboats, is ready to follow the path of the Titanic in 2016.

The Eastland Disaster Historical Society cruise is from 8:30 p.m. to 10:45 p.m. on Saturdays. Tickets can be purchased online for $ 35 for children ages 4-11 and $ 60 for adults for non-members, although there is a discount for society members.

For more information on the neighborhood, listen to DNAinfo Radio here: