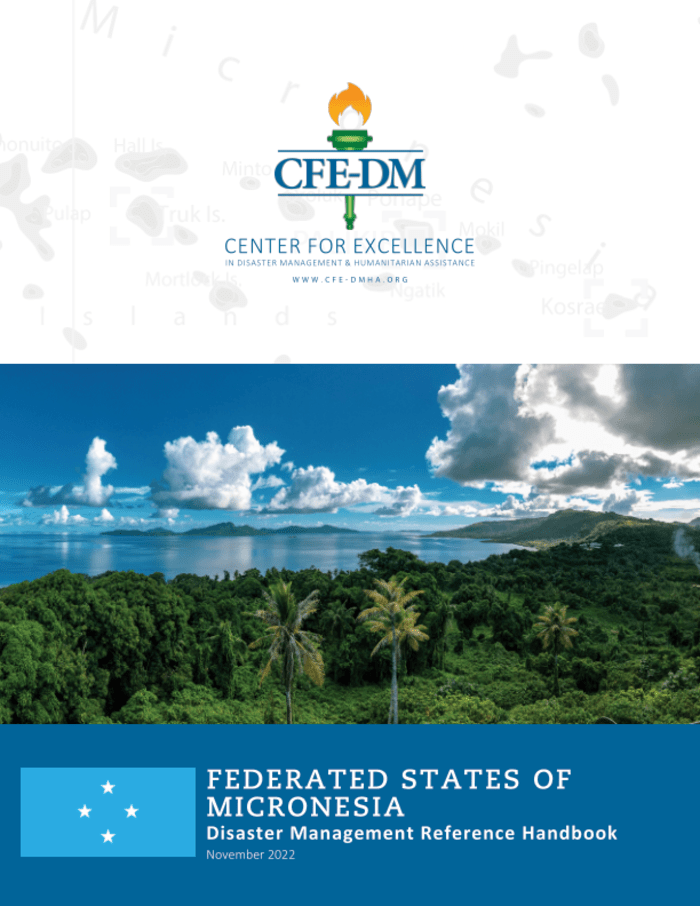 The Federated States of Micronesia (FSM) is an island country in the “Ring of Fire” of the Pacific Ocean. However, earthquakes, tsunamis and volcanic eruptions pose a less frequent threat to the country than typhoons, droughts and landslides. FSMs are also vulnerable to pandemic diseases, fires and sea level rise. Indeed, climate change is already causing sea level rise and the FSM population is already experiencing drinking water shortages and food insecurity.

In addition to sea level rise, climate change has influenced variations in winds and ocean temperatures, as well as ocean acidification, which will impact fisheries, while extreme events can damage maritime, air and telecommunications infrastructure.

Most of the FSM population lives near the coast. Thus, critical infrastructure is located mainly in the coastal zone, which is threatened by sea level rise and typhoons. While roads are essential for transportation on the island, sea and air connections provide hubs for inter-island and international travel and trade. All of these bonds are under intense pressure under normal circumstances. When a disaster strikes, already strained transport links may be further disrupted either because they have been damaged or because they lack the capacity to handle an influx of people and goods.

Due to its hazard exposure and likely increasing vulnerability under various climate change scenarios, the country has instituted a Disaster Risk Reduction (DRR) and Climate Change Adaptation (CCA) program which defines the responsibility of governments and communities.

In addition to providing political direction in the form of policy development, the National Disaster Committee (NDC) provides disaster coordination. Primary decision-making responsibility rests with the President, who can declare a state of disaster at the request of a state governor. Each governor holds primary decision-making authority for preparedness and response, while state disaster committees are responsible for disaster planning and overall response management. Below the state level are local disaster management committees and local customary chiefs. During disasters, operations are handled by National and State Emergency Operations Centers (NEOCs and SEOCs). Alongside government structures, a network of international agencies, national actors and non-governmental organizations (NGOs) operates. It is coordinated by the International Organization for Migration (IOM) and overseen by the United Nations (UN)
Resident Coordinator.

The Department of Homeland Security’s Federal Emergency Management Agency (FEMA) has developed an operational plan that guides humanitarian assistance in the event of a major disaster in the FSM. USAID/BHA supports life-saving activities in response to natural disasters and provides technical assistance to coordinate response and early recovery activities. The USAID-FEMA hybrid approach provides the majority of funding for disaster management and reconstruction. The approach is to build the capacity of first responder organizations, improve and expand end-to-end early warning systems, and improve the preparedness of at-risk communities. Early warning and weather services are supported by the US National Weather Service and the National Oceanic and Atmospheric Administration (NOAA). In addition, the United States has full authority and responsibility for defense and security. In the event of a disaster or other emergency that rises to the level where the FSM authorities and the United States Embassy to the FSM recognize a need, various US government agencies may provide assistance to the FSM.