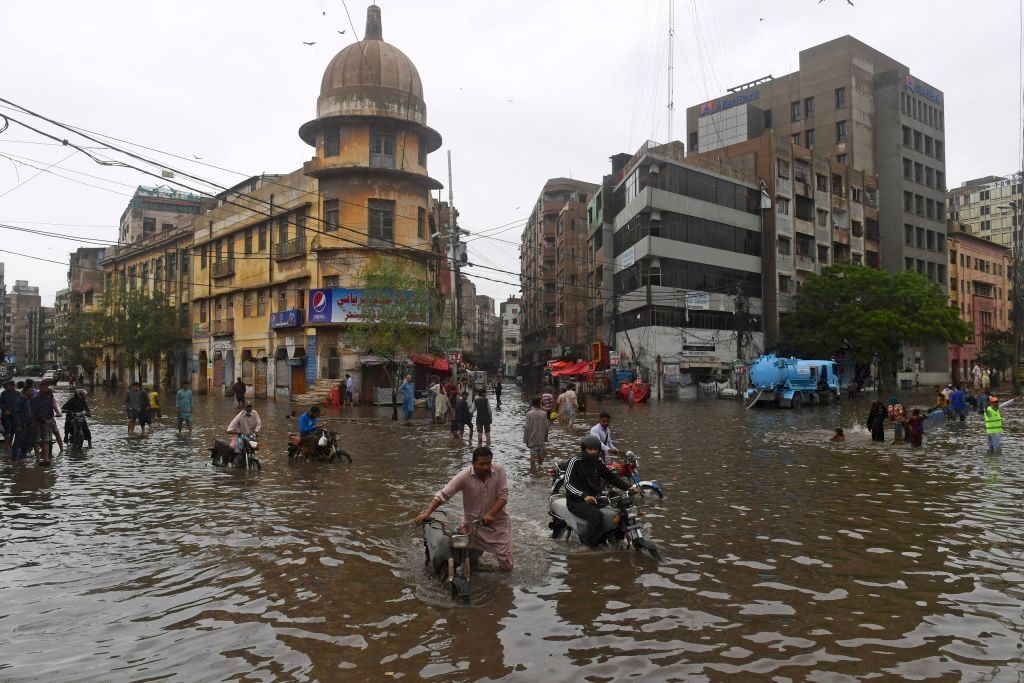 A decade after the last mega-floods that hit Pakistan in 2010, the country is once again reeling from devastation on an unimaginable scale. Monsoon rains and melting glaciers have combined to displace at least 35 million people from their homes while more than a thousand people have already died. Pakistan is estimated to lose at least $10 billion due to the widespread destruction caused by the floods. In addition, agriculture and livestock have been destroyed on a large scale, raising fears of severe food shortages in the coming months.

Both locally and internationally, the floods that began hitting Balochistan province in July received remarkably little media coverage. Instead, public debate has been dominated by the power struggle between ousted leader Imran Khan’s party and the Pakistan Democratic Movement (PDM) coalition government – including the crucial by-elections in Punjab province. In August, both sides began filing politically motivated complaints against their opponents; The arrest of Shahbaz Gill, chief of staff of Khan’s Pakistan Tehreek-e-Insaf (PTI) party, has further polarized the political landscape, with further confrontations expected in the coming weeks.

Yet, as political commentators in Islamabad and abroad were busy reporting every detail of the political gossip being generated in the centre, faint cries for help began circulating on social media from those affected in the outskirts of Pakistan. Soon, the floods began to submerge parts of Sindh and southern Punjab. The first time flooding made the front page of a Pakistani channel was on August 23. At that time, more than twenty million people had already been affected, making it the worst natural disaster in the country’s recent history.

The media’s belated response to climate catastrophe can be explained in part by the fact that the narrative around “natural disasters” does not easily offer a neat categorization of heroes and villains. It turns them into a tragedy that can invoke global pity but is incapable of generating political protest. Yet politics is really at the heart of the tragedy unfolding in Pakistan today. It is therefore imperative to name the bad guys responsible for the needless suffering of millions of people.

The unprecedented monsoon rains (which followed an unprecedented heat wave across the country) that caused flooding in Pakistan are the predictable horrors of climate change, the result of a political economy of capitalism fueled by fossil fuels . It is widely believed that colonialism and imperialism thwarted the development of poor countries, allowing the North to benefit from the exploitation of the former. According to the economic historian Utsa Patnaikthe damage done to the Indian economy alone by the British amounted to $45 trillion, creating islands of prosperity in the metropolis while subjecting millions in the colonies to poverty, unemployment and starvation .

The temporal and spatial lag between the causes and effects of climate change is one of the main reasons why it is easy for liberals to frame such disasters as “humanitarian” problems, erasing the political roots of the tragedy.

This exploitative relationship is exacerbated when we look at how greenhouse gas emissions in the Global North lead to climate breakdown, affecting countries that are not only vulnerable to climate change, but also have no the financial capacity to rehabilitate or build climate-resilient infrastructure. For example, the Global North had already exceeded its share of safe emissions in 1939, nearly eight decades before the current floods we are witnessing.

Pakistan has not even used its fair share of safe emissions (since 1959 the country has contributed 0.4% of total greenhouse gases) while northern countries have exceeded their quotas of 90%. We also know that a hundred companies are responsible for 71% of emissions, while the top twenty polluters have caused a third of the greenhouse gases in the atmosphere. Ghosts of the past return to haunt those who played no part in feeding them.

The temporal and spatial lag between the causes and effects of climate change is one of the main reasons why it is easy for liberals to frame such disasters as “humanitarian” problems, erasing the political roots of the tragedy. As Fredric Jameson reminds us, this amnesia is inscribed in the logic of capitalism, since the accumulated exploitation of the past is deployed to control the present. But since this past is rendered invisible in the commodities exchanged in the market, it appears that this exchange is equal. In other words, capitalism appears natural, but assumes a history of violence and exploitation – a history that capital denies and suppresses in its own development.

The erasure, from public discourse, of the polluters who are primarily responsible for the suffering of millions of people and the threat of planetary catastrophe, is itself part of this process of exploiting the temporal and spatial lag between emissions of greenhouse gases and their deadly consequences. The result is an attempt to depoliticize this suffering and obstruction of accountability from countries and corporations in the Global North, giving the false impression that we are “all in the same boat” as one threatened human family.

Pakistan was already facing a severe economic crisis when floods hit the country. There was an acute balance-of-payments crisis when PDM ousted Khan’s government in April when external debt was estimated at $28 billion. While the new government sought help from the International Monetary Fund (IMF), one of the main demands of the financial institution was to end oil subsidies and increase tariffs on electricity consumption. When the PDM government capitulated to these demands, inflation hit 27%. While the poorest and middle class have been hardest hit, elite privileges, estimated at $17.4 billion in a United Nations Development Program (UNDP) report, have remained untouched. In other words, we have witnessed a grotesque example of austerity for the poor but socialism for the rich.

In early August, the government announced another exorbitant increase in electricity tariffs, leading to spontaneous protests across the country. The government was later forced to rescind some conditions of the hike due to public pressure, but the overall dismal living conditions continue to haunt ordinary citizens; 40% of deaths are due to water-borne diseases, about 40% of children suffer from malnutrition and twenty million are deprived of schooling. As the future looks bleak for the public, the IMF expects Pakistan to continue “restructuring” its economy in line with market forces.

Pakistan was already facing a severe economic crisis when floods hit the country.

It is pertinent to remember that Pakistan’s debt was used to fuel an elite-run economy controlled by feudal elites, real estate moguls and military corporations. In fact, most of Pakistan’s loans have been given to military dictators who played key roles as strategic US allies during the Cold War and the “War on Terror”. Yet it is the public that is forced to pay the price for US imperialism’s alliance with Pakistan’s ruling elites.

Even before the floods, it was clear that the Pakistani economy could no longer bear the exorbitant taxes demanded by the IMF, in particular without affecting the privileges of the elites. With floods that have caused over $10 billion in damage, it is clear that Pakistan will need unprecedented support from the world. Now may also be the perfect time to open a debate about righting historical wrongs, including debt cancellation, as part of global efforts for climate justice.

Fortunately, this demand is now gaining momentum in mainstream discussions. Many organizations, including the Committee for the Abolition of Illegitimate Debts, have long argued that loans acquired as a result of colonial plunder and military dictatorships should be declared “odious” and canceled. Today, activists, frontline communities and academics are increasingly calling for debt cancellation as part of climate reparations for countries in the Global South. The Intergovernmental Panel on Climate Change has also accepted the role of colonialism in worsening global warming, further strengthening the case for reparations.

Pakistani activists are also demanding that Northern creditors cancel Pakistan’s debt, provide investment and technology transfer for building climate-resilient infrastructure, and hold their fossil fuel companies responsible for polluting the planet. This is in addition to the 100 billion dollars promised to poor countries in the Paris agreements, a commitment which has not yet been honored. These claims should not be confused with a nationalist claim in which South and North become reified categories. On the contrary, as previously suggested, the role of ruling elites in Pakistan (and arguably in the Global South) in managing economic and climate problems has been dismal.

Instead, these demands are meant to be a starting point for a politics that takes issues of historical injustice, imperialism and capitalism seriously in order to create an alternative order. It can provide the glue that connects socialists in the North who fight militarism, jingoism and fossil fuel corporations to socialists in the South who fight the exploitative nexus between local elites, foreign countries and international financial institutions. In other words, it’s a call to start a shared international project that presents a bold vision for the future rather than limiting the scope of possibilities to philanthropic endeavours.

Corporate greed and financial speculation have proven incompatible with the sustainability of life. The twin crises of debt and climate catastrophe in Pakistan give us a blueprint for a dystopian future, but also offer an opportunity to change the course of history. No poor country can rebuild after facing the scale of destruction we have seen in Pakistan. Either this will lead to escalating walls, violence and censorship as frontline communities become areas of sacrifice for corporate greed and recklessness, or we will witness global solidarity where we affirm our common humanity by redistributing resources and mitigating historical wrongs. Internationalism or apartheid are the options that the climate crisis presents to humanity. It’s time we all chose a side.