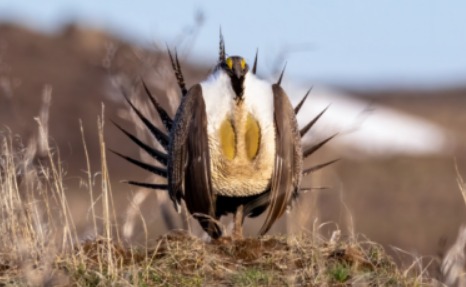 Katie Fite hid behind a waist-high clump of sagebrush, with her dog Bell tucked into the plant’s cozy hole for shelter from the howling winds.

On a rural stretch of the Oregon-Nevada border, it was the first Saturday in April, sage-grouse breeding season. More than a dozen male grouse showing off their tail feathers and giving their signature call to attract all the girls to the yard could be seen from where Fite and his dog sat.

There were wooden stakes all around the lek – the flat, open places where sage-grouse congregate during mating season – pointing to where mining companies would one day scrape this vital habitat to gain access to the minerals within. the soft earth of McDermitt Caldera.

The ancient supervolcano straddling the state border contains some of the highest concentrations of lithium in the United States, making it a prime target for miners and prospectors looking to feed a growing thirst for batteries to store. renewable energy and power electric vehicles.

“There is still hope for sage grouse here, unlike many other areas,” said Fite, who has monitored sage grouse for decades and is now director of public lands for the conservation group Wildlands. Defense. “But it will be a death knell for sage-grouse here if industrial mega-mining of lithium takes place.”

It’s also one of the best sage-grouse habitats in the country, which has declined precipitously over the past century.