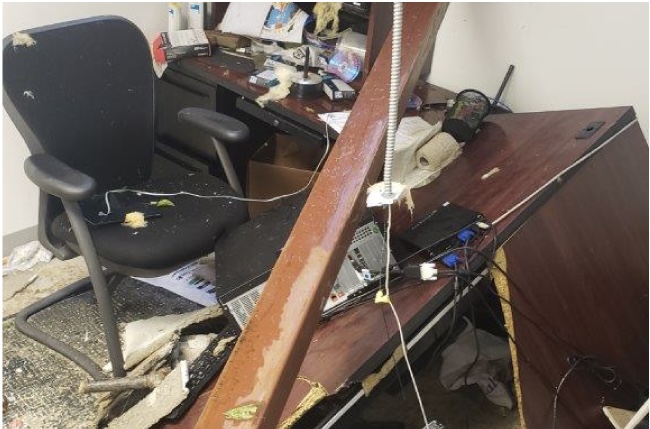 In recent years, the United States has experienced some of the most destructive natural disasters in its history. Extreme weather events that can lead to natural disasters are becoming more frequent and intense.

The Federal Bureau of Prisons (BOP) is responsible for the care and custody of more than 150,000 federal inmates and the maintenance and repair of 122 facilities. Natural disasters, such as hurricanes, can present a specific danger to inmates and staff who may not be able to evacuate, due to security measures.

BOP tracks data on its facility maintenance and repair projects, including those resulting from disasters. But a review by the Government Accountability Office (GAO) found that the BOP did not define “disasters,” making disaster risk planning more difficult.

GAO selected six BOP institutions that experienced a disaster in calendar years 2017 through 2020 and interviewed officials at each site from February through March 2021. According to BOP central office officials, from calendar years 2017 through 2020 , disasters affected 15 BOP institutions. An adverse weather event, such as a hurricane, tropical storm or tornado, affected all 15 properties.

BOP requires its institutions to develop contingency plans outlining disaster preparedness and response steps and requires staff to undergo related training. The GAO said the BOP has two data systems to collect information on maintenance and repair projects, including those related to disasters. However, the watchdog found that BOP did not define “disaster” for the purposes of tracking it in these data systems. The review also found that these data systems do not include analytical features that could position BOP to identify trends in the type, speed and cost of its projects. According to the GAO, the data systems used by BOP cannot perform the analysis to identify trends in the types, speed or costs of its projects.

BOP has various processes for managing disaster response, including using a standardized Incident Command Structure approach and documenting and responding to the impacts of disasters on inmates and staff. For example, when a hurricane hit a BOP institution, the institution converted the visiting room and training center into staff quarters and provided beds, linens, blankets, showers, and food. until staff can go home.

But the GAO has found that the BOP lacks approaches to share lessons learned from all disasters and assess the vulnerability of institutions to disasters. According to BOP, it identifies and shares lessons learned from disasters through after action reports; however, these reports are not mandatory and their content varies. In addition, officials from the six institutions with which GAO spoke said they identified and shared lessons in other ways, such as conference calls.

The government watchdog said that by implementing a systematic approach to identifying and sharing all lessons learned and taking steps to regularly gather feedback from institutions on their application, BOP could have greater assurance that institutions leverage lessons to prepare for future disasters.

GAO has found that BOP’s approach to assessing institutional vulnerability focuses on security-related risks, not disaster-related risks, such as damage to buildings. By expanding assessments to include disaster risk, GAO believes the BOP could take advantage of opportunities to build resilience and reduce the risk of damage to institutions in future disasters.

The GAO report makes eight recommendations to the BOP, including establishing in policy a clear definition of disasters for project tracking, integrating analytical capabilities into its data systems, systematically sharing lessons learned from disasters and the inclusion of disaster risk in its vulnerability assessments.

BOP agreed with five of the eight recommendations. BOP disagreed with all three recommendations to integrate analytical capabilities into its data systems, citing cost and feasibility issues, among other issues. First, BOP said that integrating the recommended features into a system that is not designed for this type of analysis might require additional funding. Alternatively, BOP said it believes a cost-benefit analysis should be performed prior to implementation to determine whether analytical features, such as milestones and cost indicators, as well as queries and alerts, can be carried out. Regarding the integration of analytical capabilities into plans to make its financial and property management systems interoperable and the use of these capabilities once implemented to analyze trends, BOP stated that it is not not in a position to commit to such an initiative before assessing its feasibility and cost.

During the review, BOP officials told GAO that they were unsure of the cost and feasibility of establishing and integrating such functionality. BOP is currently in the process of integrating its data systems, a process that is expected to last until October 2022 and includes developing a list of new requirements and capabilities for integrated systems. GAO noted that the timeline presents an opportunity for BOP to review the costs and feasibility of establishing and integrating analytics functionality. The watchdog added that BOP could then use this information to determine which features would be most feasible and cost-effective and take steps to incorporate those features as systems are integrated.

Read the full report on GAO