Deadly heat gets no respect. The natural hazards that matter – tornadoes, floods, etc. – are property-destroying traumas. Homeowners, public infrastructure and insurance companies are all being hit hard. The Great Flood of 1993, for example, destroyed 24,000 homes in Illinois and 884,000 acres of crops. In contrast, heat waves are silent and sneaky people killers. Heat waves, like neutron bombs, leave rent-generating buildings standing; the people inside are shot.

Thus, the Great Flood of 1993, which killed less than a dozen Illinoisans, is commemorated by former Governor Bruce Rauner in the 2018 Illinois Natural Hazard Mitigation Plan (IEMA). the 1995 Chicago heat wave, which killed 740 people, did not earn “greatness” in 2018 or classification as a federal (FEMA) disaster in 1995. FEMA does not list heat waves among the 19 disaster “types of incidents” governors can cite in a federal disaster. petitions; nor does FEMA require a body count in its spreadsheet for estimating a property damage petition.

Heat deaths are further trivialized due to severe undercounts in medical death records. Since heat works through five physiological mechanisms (ischemia, cytotoxicity, inflammation, coagulation, and rhabdomyolysis) to destroy one or more of seven bodily organs, there are 27 different ways heat can kill (Mora 2017). Still, it’s most often one of the 27 effects of heatstroke — heart attack, kidney failure, and more. – which appears on death certificates. Heat stroke is left out.

California medical records from 2010 to 2019 listed 599 heat-related deaths. When the LA Times turned to epidemiology to estimate heat-related deaths, the tally stood at 3,900: 6.5 times higher than the official tally. This is not a California anomaly. Kate Weinberger found a larger undercount for 297 large counties containing 174 million people. While the Center for Disease Control counted 658 annual deaths from records for the entire country, Weinberger’s epidemiological estimates give 5,600 heat deaths per year (1997-2006) for 62% of the US population: thus, well over 8.5 times more than the CDC count. . 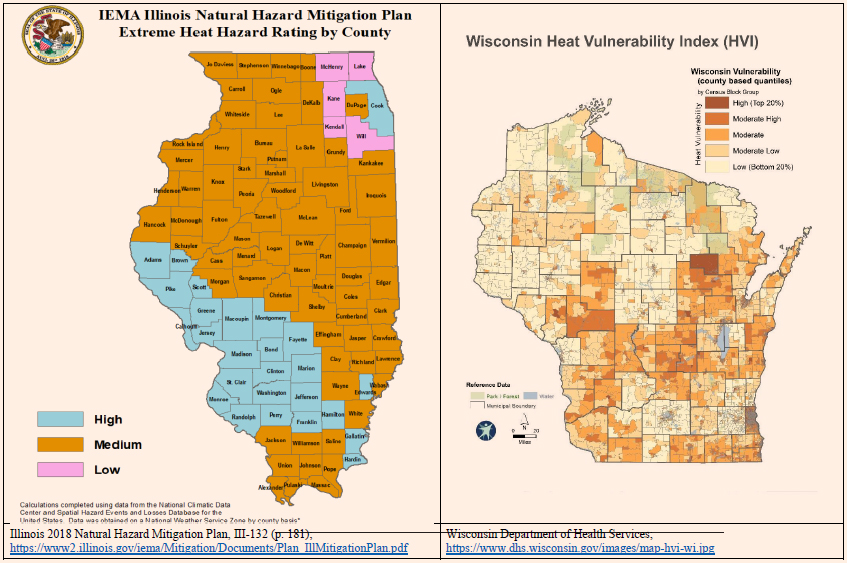 In contrast, the cartoonish IEMA “heat hazard” map (Figure 1a) looks like the product of a botched high school science experiment. IEMA chose not to consider heat vulnerability, negating the need for mitigation planning. IEMA first covered up the risks by choosing an indefinite measure of air temperature (the “heat risk” rating) rather than a series of empirically validated measures of human vulnerability, such as those used by the Wisconsin.

Second, it engaged in research misconduct by aggregating its fuzzy measurement error to the county level, a decision that assigns an identical “heat risk” rating to each of Cook County’s 136 highly differentiated municipalities. . Therefore, a wooded Winnetka mansion, bordering Lake Michigan, with backup power generation, receives the same “heat hazard rating” as a building with no trees, an asphalt roof, and no AC power in the building. one of Chicago’s West Side concrete jungles.

This deliberate, misleading and dangerous aggregation is scientific malpractice. If a research sociologist engaged in such data misrepresentation, he could face disciplinary proceedings before the American Sociological Association’s Professional Ethics Committee.

Thank you FEMA and IEMA. Like the Murder City Machine Guns, you’re part of the team.