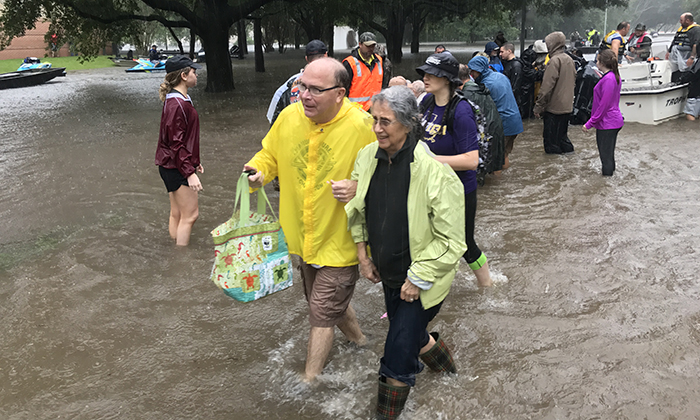 AUSTIN, Texas – While natural disasters can cause horrific damage to homes and infrastructure, they can bring married couples closer together, at least temporarily. That’s according to a one-of-a-kind study by researchers at the University of Texas at Austin that looked at couples in the Houston area before and after Hurricane Harvey.

The study, published this week in the journal Psychological Sciences, has implications for how best to help families cope with different types of stressors.

The research team had previously interviewed 231 newly married couples about their relationship satisfaction shortly before Hurricane Harvey hit the Texas coast in August 2017, devastating much of the Houston area. With the advent of the hurricane, researchers saw a unique opportunity to follow the dynamics of relationships through the aftermath of a natural disaster. A study of the relationships with data before and after a natural disaster had never been done before.

“We initially set out to study the effects of everyday stressors, such as financial problems and the transition to parenthood, on couples in the early years of their marriage,” said Hannah Williamson, assistant professor of human development. and Family Sciences at the University of Texas at Austin and lead author of the study. â€œWhen the hurricane struck in the middle of the study, it allowed us to examine the effects of a major acute stressor. Unfortunately, more and more people are suffering from disasters such as hurricanes and forest fires. “

Researchers also looked at how bad the hurricane experience was for couples, asking them about damage to their homes, financial loss and more. It turns out that these differences in experiences were not factored into the relationship satisfaction results.

None of this means couples with relationship problems should start planning Florida hurricane season now. The researchers noted that the increase in relationship satisfaction was not permanent and that couples returned to pre-hurricane satisfaction levels within a year.

â€œA natural disaster can really put things in perspective. People realize how important their partner is to them when they are ejected from the daily stresses of life, â€said Williamson. â€œThere may be therapeutic applications to this if couples can change perspective in the same way without having to experience a natural disaster. “

Thomas N. Bradbury and Benjamin R. Karney of the University of California at Los Angeles also contributed to the research, which was funded by the National Institute of Child Health and Human Development.