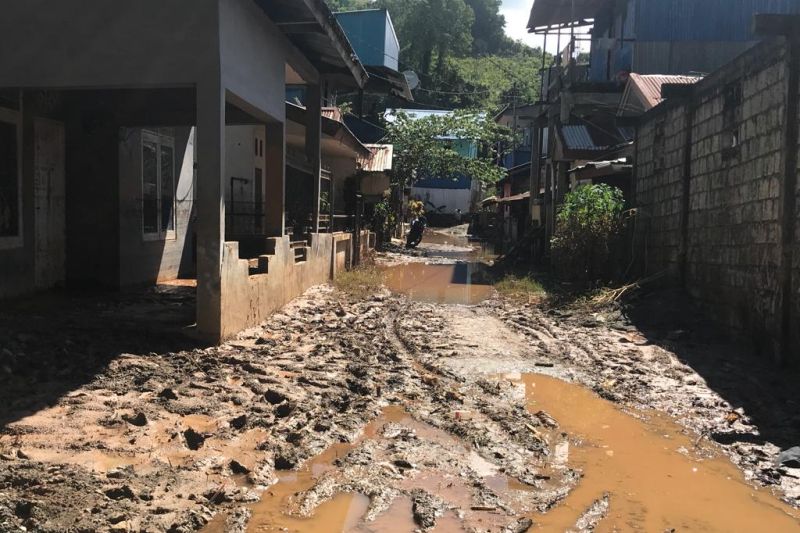 Floods and landslides that hit the city of Jayapura, Papua Province on January 6, 2022, for more than a week left puddles and high mounds of mud in the affected area.

These are still visible in the residential areas of Organda settlement area of ​​Heram and Konya sub-districts. Roads in the area are still filled with mud reaching heights of about five to ten centimeters and puddles, making it difficult for vehicles to navigate the access road to residents’ homes.

Several residents affected by the floods and landslides have decided to stay at home for fear of looting. They were spotted cleaning up the yard.

Meanwhile, residents whose homes could not be occupied due to heavy flood and mud damage have opted to evacuate to places prepared by the Jayapura city government.

One of the refugees was Yulce Semon, 30, who had stayed for a week at Trikora Sports Center, a refugee camp in the city of Jayapura, Papua.

Semon said his family could not live in the house despite the flood waters drying up. He and his family have lived in Organda Housing since 2003, but the floods and landslides weren’t as severe as this incident.

“My house is already dry, but the smell of mud lingers in the yard. The house is no longer suitable for us to live in. The mud is very thick, about five centimeters,” he noted.

At the evacuation camp, along with 200 other residents, Semon received aid in the form of ready-to-eat food, bedding and personal hygiene items.

The landslides and floods that hit on January 6 affected 19,327 people.

Eight people are believed to have died, while six people were injured. They had been treated in several hospitals in the city of Jayapura.

Besides the Trikora Sports Center, the refugees stayed at the Jayapura Center for Social Welfare Education and Training (BBPPKS).

The location housed residents who had fled the Youtefa market area and a vocational school in the Entrop area.

The landslide that caused the death toll also happened at the Bhayangkara Jayapura Dormitory. The disaster happened, because residential housing was located on the slopes of the hills.

Mano noted that if the rain lasts for one to two hours, flooding will immediately occur in the area. Mano informed that the three places are located in a water reservoir area.

“It’s a water reservoir. Regardless of the mayor, the place is problematic. However, we are trying to manage the area so that it is free of flooding. We prohibit illegal construction without a building permit in Papua,” he said.

Mano asked the help of each village chief to manage the distribution of aid to their inhabitants.

The mayor assured that the aid received will be paid directly to residents in need and not only collected at the Waringin Sports Center.

In order to speed up the management of the floods, Manu urged the refugees to return home immediately. His side will help the inhabitants, whose houses have been affected by the floods.

The acceleration of flood management efforts was also bolstered by the visit of Social Affairs Minister Tri Rismaharini to the city of Jayapura after recently providing flood assistance from Aceh province.

The Minister met with flood victims and distributed social aid to Papuans. Rismaharini also distributed ready-to-eat food parcels, cleaning kits and shoes to get children back to school.

Rismaharini handed over aid to flood and landslide victims in Jayapura which included disaster logistics assistance, compensation for the heirs of seven victims, 500 parcels of basic necessities, 500 parcels of cleaning tools , 500 packages of school materials, 500 pieces of sarongs, 50 packages of baby supplies and natural materials, for a total of Rp 1,390,539,388.

In addition, the minister provided a water purification or treatment tool that should solve common flooding problems, especially the lack of availability of potable water.

“With water treatment equipment, water can be made into ready-to-drink water,” she remarked during a press conference at Waringin Sports Center, Jayapura on January 13.

On the same occasion, Rismaharini expressed optimism that the local government would remain vigilant regarding hillside residential housing that could trigger landslides.

The minister pointed out that global warming could increase the intensity of rainfall every year and landslides in almost all parts of Indonesia.

“Conditions in Sibolga in North Sumatra are exactly the same as in Jayapura. I am hopeful that other governments, not just the government of Jayapura, will keep an eye out for residential hillside housing” , she said.

To avoid casualties from floods and landslides, disaster-affected residents should be moved to a safer location. To this end, the ministry will provide tents for the temporary refugee camps.

Similar to the incident in West Java, his administration chose a location in Sukabumi for disaster mitigation when residents had to evacuate in the event of flooding.

“This temporary camp will be helpful in reducing the number of casualties as the rainfall is getting heavier and heavier,” Rismaharini noted.

In addition to providing logistical assistance, the minister prepared psychosocial support for flood victims, especially for children in BBPPKS Jayapura.

The minister also reviewed the state of preparedness of the public kitchen at BBPPKS Jayapura. She monitored the process of distributing food to refugee locations.

Looking at the existing conditions, flooding in Jayapura is a major alarm to all elements. The government needs to focus on land management as well as disaster mitigation.

Disaster mitigation in Jayapura must be prepared at the earliest to prevent the death toll from rising as Indonesia still faces extreme weather and heavy rainfall in 2022.