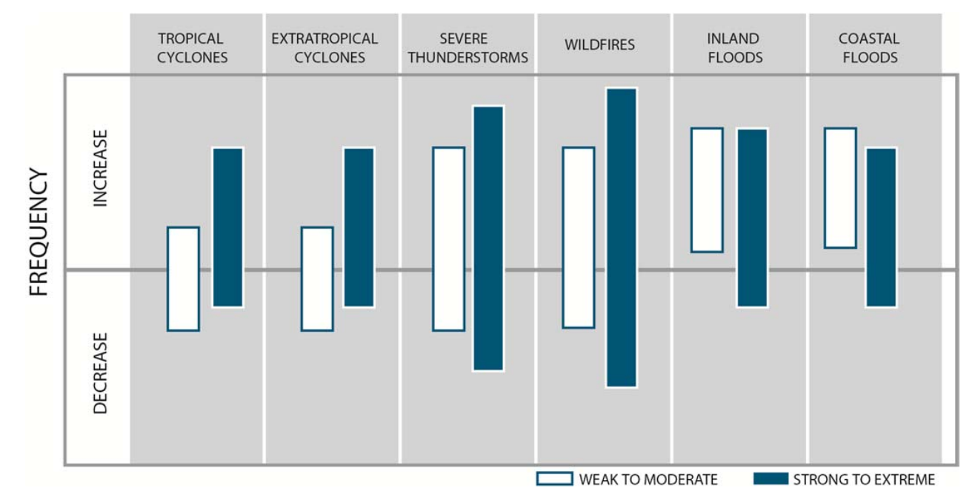 Climate science is a rapidly evolving field of study, and while projections of future environmental outcomes remain uncertain, the need to invest in long-term resilience strategies has never been clearer. A multifaceted approach to climate action focuses not only on reducing carbon emissions and transitioning to renewable energy sources, but also on ensuring that individual entities prepare and adapt for what lies ahead .

Many of the dangerous and costly manifestations of climate change are already here. Rising temperatures are creating more favorable conditions for a higher frequency or severity – or both – of many natural hazardscreating a risk of increased damage to physical assets and disruption of business operations.

Climatologists are convinced that, for perils such as extreme heat, floods and wildfires, warming temperatures make catastrophic events more likely.

For example, researchers estimate that the rainfall that caused catastrophic flooding in Texas in the aftermath of Hurricane Harvey in 2017 has changed from a roughly 2,000-year event in 1900 to a 300-year event in the present day. , at a projection of 100 to 100 years. event of the year by the end of this century.

But for other perils – tornadoes, hurricanes and other windstorms – the impact is less clear. Many scientists believe that climate change may reduce the overall frequency of tropical cyclones, but increase the frequency of the most intense cyclones and the total precipitation of all storms. The net impact is complex and depends on the region.

As tempting as it may be to blame disasters for climate change, there is natural variability in extreme events, and the degree to which they are affected by warming temperatures is apparent for some perils but not established for others. the science of event attributiona relatively new discipline, aims to answer these questions.

It is also important to note that some of the major events of recent years are not out of the ordinary if one takes a long-term view. If the 1926 Miami hurricane hit today, it would cause an estimated $300 billion in damage and incalculable human loss. Similarly, a repeat of the 1923 Greater Kanto earthquake in the Tokyo area would cause approximately $1.5 trillion in property damage today, far more than any recent earthquake.

When we think about the damage caused by recent natural disasters, it is important to place climate change in the larger context of what is contributing to increased losses. The much more certain risk factor, which goes beyond the impact of climate, is the dramatic increase in the number and value of properties in recent decades, particularly in high-risk areas.

As populations have migrated to cities and coasts, more homes and businesses are being built in flood-prone areas, inland floodplains, and at the interface between nature and urban areas where risk forest fire is the highest.

A recent study published in the journal natural climate estimated that the number of people exposed to flooding in the United States is expected to double over the next 30 years, primarily due to population growth, which is expected to far exceed the impact of climate change.

This is not to downplay the impact of climate change, but to point out that much of the phenomenon of increasing losses from natural hazards is governed by where people choose to live and build. . It’s not just chaotic atmospheric dynamics. This means that a significant part of the risk can be managed through mitigation, adaptation and policy.

The insurance industry has been preparing for big losses using catastrophe modeling for over three decades now. These models – available for a wide range of perils, including storms, earthquakes, wildfires and floods – provide a data-driven view of risk, based on the most recent scientific knowledge on the probability , the location and severity of extreme events and their impact. .

Insurers and reinsurers use modeling tools to understand the potential for losses, and in recent years climate change has entered the insurance industry catastrophe modeling discourse significantly.

One concern is that historical data used to simulate potential events reflects past conditions that are no longer applicable. To create a forward-looking view, modelers more carefully use the range of historical data used in model development to better represent current conditions and the effects of climate change that have already occurred. As risk evolves, the models are updated to incorporate the latest research and data, ensuring a view of risk that reflects the short-term climate over a 10-year period.

Climate change is an urgent threat requiring decisive action. Communities around the world are already experiencing heightened climate impacts, from droughts to floods to rising seas. The World Economic Forum’s Global Risks Report continues to rank these environmental threats high on the list.

To limit the global temperature increase to well below 2°C and as close as possible to 1.5°C above pre-industrial levels, it is essential that businesses, policymakers and civil society advance short-term and long-term global climate actions in accordance with the objectives of the Paris Agreement on climate change.

This includes the Alliance of CEO Climate Leaders, a global network of business leaders from various industries developing cost-effective solutions for the transition to a low-carbon, climate-resilient economy. CEOs use their position and influence with policymakers and corporate partners to accelerate the transition and realize the economic benefits of a more secure climate.


How to start preparing

There are clear steps that individual organizations can take today to reduce the potential for losses from extreme events.

First, it must be understood that increased development in hazardous areas and rising property values ​​are also responsible for the historical increase in losses. Second, recognize and prepare for the fact that climate change will inevitably continue to increase losses in the future, and that some amount of climate change is already “built in” to the system.

For both of these, current modeling tools – which have long helped the insurance industry prepare for natural disasters before they happen – can be used now to establish a risk baseline for insurance assets. ‘today.

Organizations can model a variety of perils to understand the risk to existing assets and supply chains, formulate strategies to protect them through insurance or physical mitigation, and plan resilient growth strategies for future assets . The models can also be used to test the sensitivity of implemented protective measures against future climate conditions and a full range of high-impact scenarios.

Climate change is dominating conversations in all sectors of the economy. Although much of the focus is on a future state decades away, modeling tools allow the risk of a climate state near the present to be assessed.

It is crucial for organizations to recognize what their baseline is so that they can understand how it may evolve in the years to come and create the best coping strategies.

The opinions expressed in this article are those of the author alone and not those of the World Economic Forum.