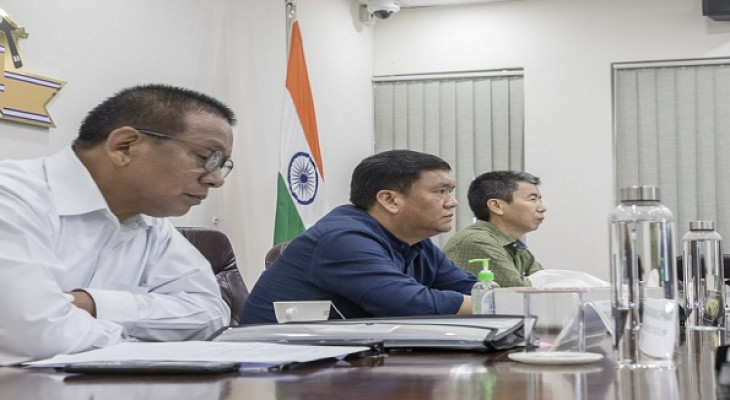 Itanagar, May 19 (UNI) At least seven people have lost their lives in rain-triggered landslides in Arunachal Pradesh this summer. Among the victims are four in the Itanagar capital region and three in the remote district of Kurung Kumey, while two people are missing – one in Itanagar and one in Anjaw. As of Wednesday, 14 districts, 33 villages and around 3,000 people have been affected. Additionally, at least 7.6 hectares of cultivated fields were destroyed and 392 homes damaged across the state. These figures were shared by the State Disaster Management Authority (SDMA) when Chief Minister Pema Khandu held a disaster preparedness review meeting with senior officers from all relevant departments including including the State Disaster Response Force (SDRF) and the National Disaster Response Force (NDRF). at the Civil Secretariat of the State here on Thursday. It should be mentioned that three family members were killed in a landslide at Sulung Taping village in Kurung Kumey district on April 17, while four people died in two separate landslide incidents in the area. of the capital last Sunday and Monday and the body of a “disappeared” lady has not yet been found. Taking to his Twitter account, Khandu wrote: “Following adverse weather conditions and relentless rainfall, we have been reviewing our disaster management protocols and preparedness, with senior officials. Deliberate on rescue and search operations as well as moving the vulnerable population to safe places. Asked everyone to be vigilant. An official communication said that the Chief Minister, while taking the report on the preparedness of all parties concerned, expressed his satisfaction that the state apparatus is well prepared to deal with disasters, the case applicable. “While we don’t want disaster to befall us, we cannot deny the fact that nature is unpredictable and we need to be prepared,” he said. Khandu emphasized a robust early warning system so people could be warned in advance and loss of life avoided. “Human life is precious. We must go to extreme lengths to avoid loss of life,” he said and called on officials from the state Disaster Management Department not to rely solely on phone or WhatsApp messages, but to personally contact their leaders in the districts in case a warning needs to be conveyed. He also insisted that the State Emergency Operations Center (SEOC) should be active 24 hours a day throughout the monsoon season, while the SDRF and NDRF should avoid giving grants. furloughs to their staff and remain vigilant at full power. Commending the Capital District Administration for evacuating 17 households from vulnerable areas in the State Capital Region, Khandu ordered all Deputy Commissioners to do the same to avoid loss of life. human. “At least four months of monsoon await us. Let us be fully prepared,” Khandu added. According to other relevant departments, no major damage has been reported to the highways, and there is enough food grain in stock, the state capital’s water supply has been restored, and the Department of health is ready with teams for any emergency. The meeting was attended by Advisor to the Minister of Disaster Management Tanpho Wangnaw, Chief Secretary Kaling Tayeng, Planning Commissioner Prashant Lokhande and senior officials from Finance, Health, Food and Civil Supply, PWD (Highway) and Public Health Engineering Departments, District Administrations, Police Headquarters, NDRF and SDRF, the statement added. UNI TD KK