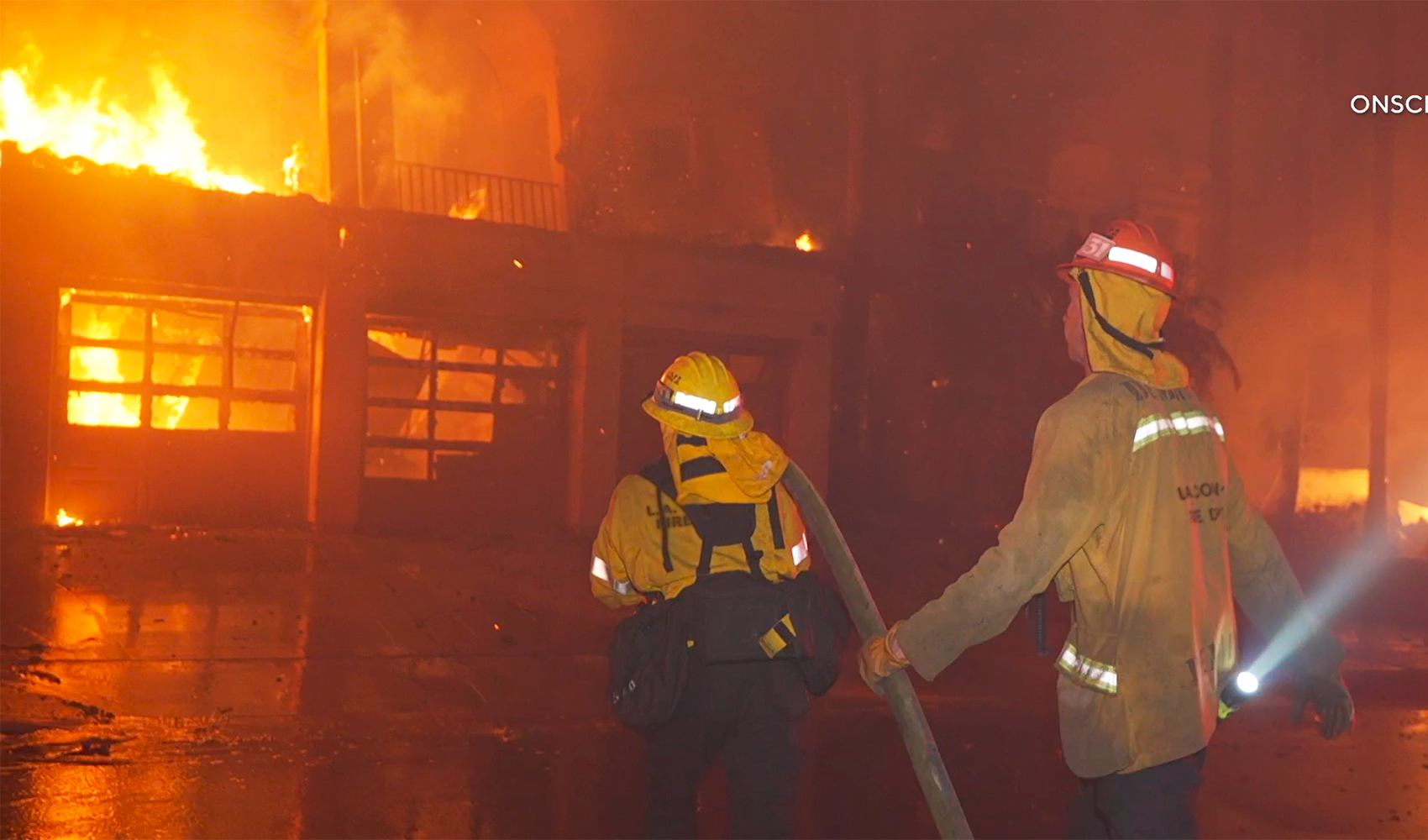 A 200-acre blaze that devastated an upscale Laguna Niguel neighborhood, destroying 20 homes and damaging 11 others, has been 40% contained, authorities said Saturday.

The Orange County Fire Authority said 456 firefighters were on the scene, with personnel using the drones’ heat-seeking capabilities to search for hot spots within the fire’s perimeter.

Evacuation orders have been lifted for 769 homes.

The fire broke out at 2:44 p.m. Wednesday near the South Orange County Wastewater Authority’s coastal sewage treatment plant, destroying or damaging homes in a relentless march caused by wind and terrain, but not causing only minor injuries to two firefighters.

OCFA Captain Thanh Nguyen said on Saturday that the two injured firefighters had been treated and released.

“Today the focus is on finding hotspots and mitigating any danger to continue opening up areas,” Nguyen said.

There was no immediate timeline on when the rest of the evacuations could be lifted. An evacuation center has been established at the Laguna Niguel Community Center at 28751 Crown Valley Parkway.

Saturday’s forecast called for a high of 82 degrees at Laguna Niguel, with winds of 8 mph.

But as firefighting efforts progressed, the damage was already done. Streets once lined with multimillion-dollar homes overlooking the Pacific Ocean have been reduced to scenes of war-worthy rubble, witnessing a firefight that saw flames leap from rooftop to another as the winds carried embers through the heart of the neighborhood.

The flames spread rapidly as they moved through thick hillside brush, aided by ocean winds that ignited spot fires in front of the main blaze. The fire worked its way upward, advancing onto Aliso Summit Trail and into nearby multi-million dollar estates.

The flames reached a hilltop and advanced into an exclusive neighborhood, engulfing homes along La Vue and Coronado Pointe near the Aliso Summit Trail. The flames advanced even as fixed-wing planes dropped fire retardant on the hillside in hopes of slowing the progress of the flames. Several water-dropping helicopters were also used in firefighting.

“When these three components come together, there’s not much firefighting efforts can do,” he said. “The biggest thing we want to do is keep people out. This is where the evacuations take place. And so that’s unfortunately what we had. … It was really those fuels being as dry as they were, the high winds and the alignment with the topography is what created the devastation.

“We’re very lucky there aren’t more homes and we have no loss of life, which is fantastic and in our minds that’s success.”

The cause of the fire is still under investigation, although Southern California Edison sent a letter to the state’s Public Utilities Commission reporting “circuit activity occurring shortly after the hour reported” of the fire, but it was not certain that she contributed to the start of the fire.

“We submitted an initial electrical safety incident report to the California Public Utilities Commission. SCE is required to submit an ESIR to the CPUC on certain types of incidents,” SCE spokesman David Song said. “…Our information reflects circuit activity occurring in the vicinity of the reported time of the fire. …Submission of this report to the CPUC is intended to alert them of an incident so that they may conduct their own investigation.

SCE had staff and investigators at the scene Thursday.

California has secured a Fire Management Assistance Grant from the Federal Emergency Management Agency to ensure the resources needed to fight the fire are available, Gov. Gavin Newsom said in a statement.

The grant is provided by funds from the Federal Disaster Relief Fund and allows local, state and tribal fire-response agencies to apply for reimbursement of 75% of their eligible fire suppression costs.

Orange County also approved an emergency proclamation on Thursday to ensure that all available resources are available to fight the fire.

“This emergency proclamation allows the county to fully deploy all available resources, actions and measures deemed necessary to ensure the safety and well-being of Orange County residents and property,” according to a county statement. “Assistance from other local agencies in the Southern California area supplements local resources.”