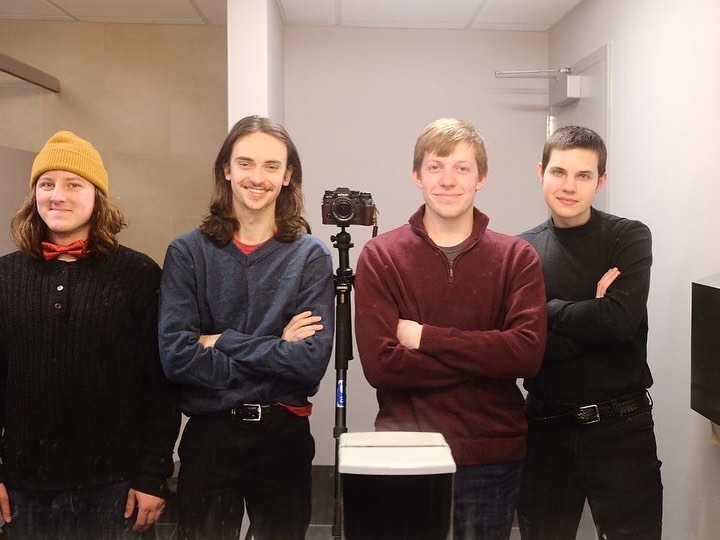 MANISTEE — Now that the live music world seems to be bouncing back in this arena after stalling for the past two years due to the COVID-19 pandemic, new bands are emerging on the local scene.

One of them is a young group of artists known as Potential Disaster. The band consists of Noah Cameron on drums, Thomas Ryan on synthesizer and audio engineering, Kaden Powers on keyboards and Nathaniel Light on vocals.

“We just started in November and we’re playing a mix of electronic jazz, fusion with a bit of rap as well,” Cameron said. “So it’s a mix of different genres of music and a bit of everything.”

Like most new bands, the members have a deep interest in music and wanted to give live performance a chance. They carry a unique sound that appeals to a wide group of people who love music.

Cameron said the group formed like most new ones, when friends start talking and learn that they both have an interest in music. This led to the two of them starting to play music together.

“Nathaniel and I met at West Shore Community College and we started doing a lot of duo stuff,” Cameron said. “Tommy and Kaden were also doing duet stuff at the time, but we all knew each other and were friends, so we kind of got together and decided to make music.”

They’ve been excited about their prospects since forming their band and working hard to create a playlist of music they can perform.

“We worked hard at the start, but now we’re slowing down a bit and meeting a little less than we did at the start,” Cameron said. “But we’re still meeting and jamming and writing music, so it was fun playing with these guys.”

The band has a playlist that features music from other artists, but they’ve also created their own songs. The four members of the group have created songs which they are currently working on integrating into the group.

“We play a few covers, but mostly we’ve written a lot of our own songs,” Cameron said. “We’ve all been interested in writing our own music, and it’s going to be a little different when we all get it together. It’s a bit of our own tastes and styles and when it comes together it’s going to be something completely different, which is fun. ”

The band recently performed at Taco ‘Bout It Mexican Fusion. Cameron said the band hopes to expand to perform in other downstate locations in the coming months.

“We’re looking at playing more in the south Lansing area because two of the guys are moving there this summer, so it can be a bit difficult to get gigs together and keep doing that here,” Cameron said. . “So it’s going to be kind of part-time and then hopefully do a gig down-state once in a while, because we’re kind of playing it by ear right now.”

Cameron laughed when asked about the band’s name, Potential Disaster, saying it was kind of a joke if things weren’t working out with the band.

“It was just kind of a funny thing,” he laughed.

Like most musicians, band members like to perform to get feedback from the audience’s response to their music. Cameron said that since it’s a new band that hasn’t played much, he shares his sound with friends and gets good feedback about it.

“We’re just musicians who love the creative outlet to express ourselves together and do it as friends,” Cameron said. “I’ve shared our music with colleagues and friends and it’s been good.”

Cameron said they’re taking things very casually and right now they like creating music instead of actively looking for lots of gigs to play.

“We’re playing it by ear right now and if anything comes up we’re all for it,” he said. “We’re having fun right now and that’s what it’s all about.”

Find more information about the band at facebook.com/PotentialDisasterBand or pdband.com.