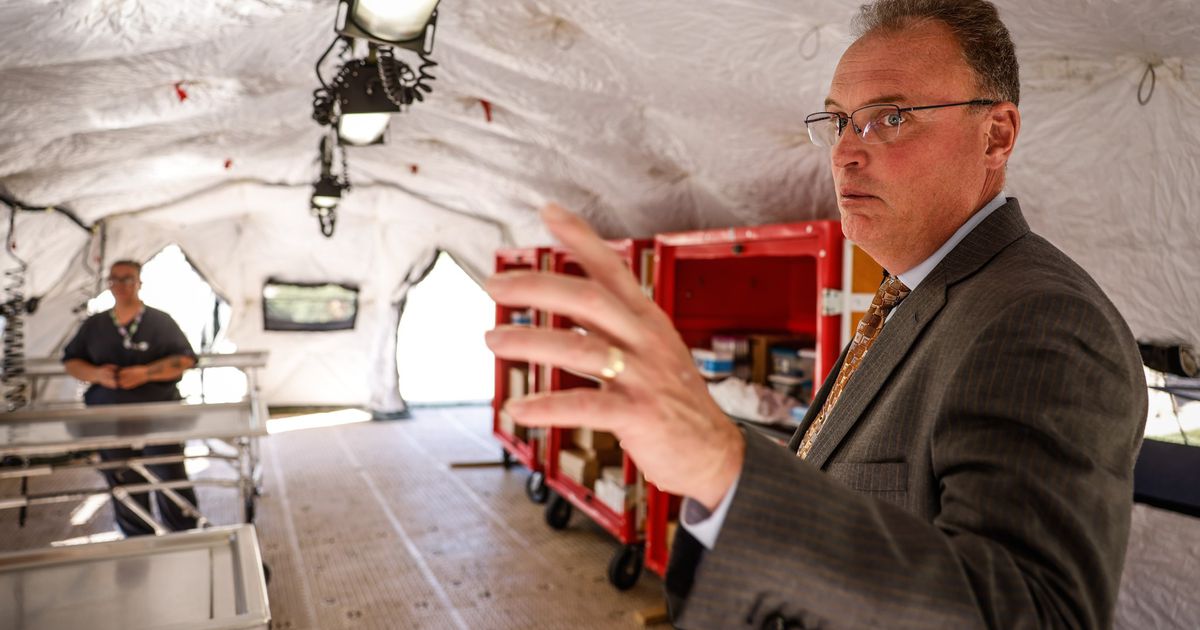 No one else in the state has a setup like his office, the coroner said, adding that they can work with other coroners across the state to help them if something happens. Harshbarger has built relationships with many of these coroners, as his office already performs autopsies in about half of the counties in the state. Of the 88 counties, the local coroner is performing autopsies for between 35 and 45 of them intermittently, he said.

“I have staff who are salaried here for the sole purpose of covering other people’s contracts,” he said.

Ohio uses regional autopsy centers, which means that many coroner’s offices in smaller counties do not do their own autopsies, but instead contract out the work. The Montgomery County Coroner’s Office works with nearly every county in the Southern Ohio region except for Butler, Hamilton, and Clermont counties. In 2021, the coroner’s office performed about 2,300 autopsies, of which about 1,550 were contract cases, according to office data.

Through September of this year, the local coroner’s office has performed approximately 1,700 autopsies this year, including just over 1,100 contract cases.

The corner office has contracted with numerous counties for years, Harshbarger said, noting that the only new relationship the office has this year is with Randolph County in Indiana. Darin James, the county coroner there, said he chose to work with the Montgomery County Coroner’s Office because it had a good reputation and competitive pricing.

“They’re doing a really good job, I’m very happy with them,” James said. “Their results have a quick turnaround for us and I haven’t had any complaints from any of my deputies or myself with them.”

Harshbarger said his office’s contracts with other counties benefit Montgomery County residents. He said he’s been able to retain staff so the workload isn’t too heavy for the office and the extra work helps his office win grants it wouldn’t otherwise get.

“We cover one region, so I can go into the grant application and say I cover 40 counties, the trailers can be used anywhere in the state,” Harshbarger said, “That’s a lot more priority high for the state I’m just going to cover (a county).

In August, the Dayton Daily News reported in its investigation that Harshbarger had been hired earlier this year for a position with the Franklin County Coroner’s Office, with the two offices signing an expanded contract for autopsy work.

The Dayton Daily News reported last year that several elected coroners in the area were working alongside other offices with which their county had contracts. The Ohio Ethics Commission says the practice “raises issues under the Ethics Act.”

Harshbarger said he took the job to help the Franklin County Coroner’s Office rebuild after a severe staffing shortage, and took steps to alleviate ethical concerns. This includes a pay cut and a reduction in his workload in Montgomery County and recused himself from anything related to contract negotiations between the two counties he works for.

“I always sign all death certificates. I always do all the monitoring required. I am less present, but the office works,” he said.

The pay cut reduces his Montgomery County compensation to $89,709 this year. He was paid $219,862 last year, making him the second highest paid employee in the county.

Harshbarger received the Franklin County job offer in March and began work in May, earning $325,000 a year working 30 hours a week. His title is Deputy Coroner/Medical Examiner. Harshbarger is a licensed medical examiner.

Harshbarger said the job was a “good opportunity”, but he mainly traveled to Franklin County to help it deal with a staff exodus that left him as the only staff medical examiner there. -down when he started amid a spate of deaths requiring autopsies.

He said he fully recused himself from negotiating that contract after consulting with Montgomery County commissioners and their attorneys and delegated the process to his office manager, Brooke Ehlers. Ehlers is the contract signatory for Montgomery County.

Autopsies Performed by the Montgomery County Coroner’s Office by Year