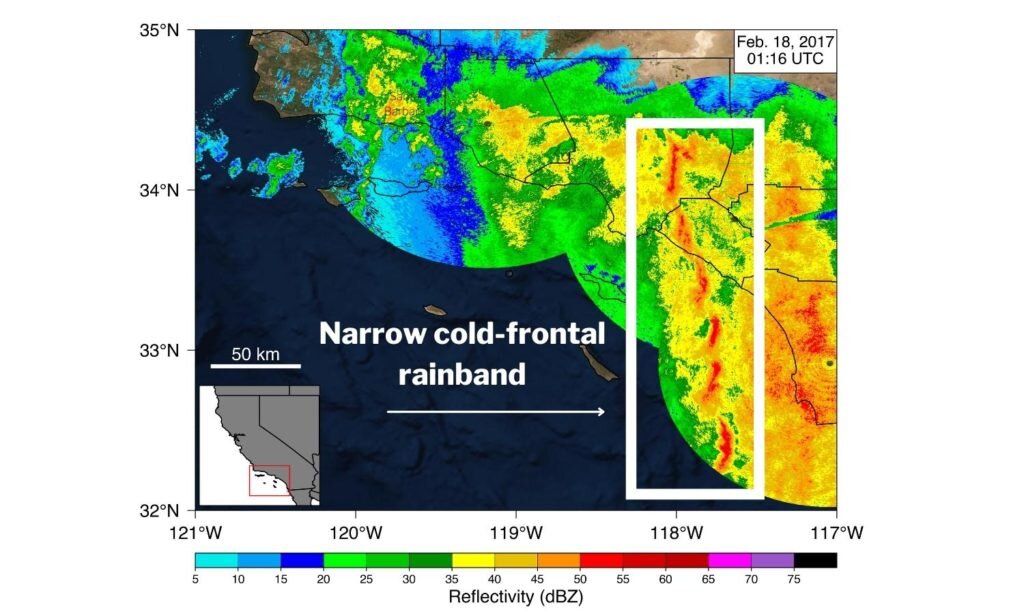 New research seeks to improve prediction of brief but intense thunderstorms that can cause devastating flash floods and landslides.

Storms, called narrow cold frontal rain bands, are long bands of rain that can stretch tens to hundreds of miles in length but are only a few miles wide. They form along many coasts around the world, including both coasts of the United States

Intense rains associated with narrow cold-fronted rain bands may only last a few minutes at a particular location, but the rain can cause catastrophic flash floods, debris flows, and landslides, and can occur with tornadoes and severe thunderstorms. With all of these potential dangers, storms can trigger broad evacuation alerts. But it’s hard to predict when and where the heavy rain will hit and cause hazards, and evacuations can be carried out over too wide an area. It is important to improve forecasts of these atmospheric phenomena to avoid evacuation fatigue and maintain public confidence in warning systems.

A new study analyzes three decades of radar and hazard warning data from Southern California, creating a catalog of rainbands that will help improve predictions of when and where these hazardous events will be. The study was published in the journal AGU Geophysical Research Letters, which publishes high-impact, short-format reports with immediate implications spanning all Earth and space sciences.

Researchers found that from 1995 to 2020, 60% of these events resulted in at least one National Weather Service warning, and 15 of 94 events resulted in 10 or more warnings as bands swept through Southern California. Some of the most intense events have been associated with atmospheric rivers. And most affected during the region’s already wet winter months, from January to March.

The new Rainband Catalog will help scientists create storm forecasting and tracking algorithms, with the ultimate goal of “predicting now” storms: forecasting their patterns and hazards hours in advance.

“Our current predictive models struggle with the location, timing and intensity of these events, and we need to improve that for evacuation warnings. … If we issue evacuation warnings for what turns out not be a high-impact event, you start to experience evacuation fatigue, where people might not trust the warnings in the future,” says Oakley.

looking for the clouds

To discern how often, when and where the rain bands occur, the researchers manually reviewed years of radar data, looking for telltale “hole and core” patterns of these rain bands, and paired their results to National Weather Service hazard warnings about the same time. period.

They found that the number of narrow cold-front rain band events varied widely, ranging from a complete absence of these features to about a dozen per year, with most occurring between January and March. About 60% of events between 1995 and 2020 resulted in at least one National Weather Service warning and 15 exceptionally intense events resulted in 10 or more flash flood, tornado or debris flow and landslide hazard warnings while they were sweeping southern California.

“All but two of these intense rainband events were associated with atmospheric rivers, and two-thirds of our entire catalog were as well,” says Marian de Orla-Barile, lead author of the study and PhD in geography. student at the University of California, Santa Barbara. High water vapor content in the atmosphere and intensifying low pressure systems were also commonly associated with rain bands.

“Narrow cold frontal rainbands produce some of the highest precipitation of any extratropical cyclone precipitation band,” says Brian Collins, a USGS geomorphologist who was not involved in the study. “The dangers vary depending on where you are, but the key part of the equation is that it rains a lot in a very short time.”

The short lead time mentioned by Collins highlights one of the difficulties of damage prediction. The Narrow Cold Frontal Rain Band Study Catalog is a critical first step in building an algorithm capable of automatically identifying and tracking areas of intense and potentially damaging rainfall. Such an algorithm is at the heart of “Nowcasting”, which aims to predict rainfall within hours. Ultimately, as the algorithm and its database improve, predicting storm tracks and impacts will be within reach.

Because rain bands can strengthen or weaken over time, especially when they encounter mountainous topography, it is difficult to determine when and where they will produce the most intense precipitation and pose risks. Not all narrow cold-fronted rainbands produce disastrous precipitation, and not all pass over a populated area below a recent wildfire scar or landslide hazard area. land that should be evacuated.

“Often warnings are issued for large areas due to the uncertainty of where the band of rain will have this high intensity precipitation. So you end up warning a larger area than you need to warn” , says Collins. Consideration of local conditions – such as recent forest fires or heavy rains that may have saturated the ground, making slopes prone to landslides – is important in predicting the likelihood of a cold front rainband hazard. narrow, Collins points out.

“With the projected increase in wildfires as well as the projected intensification of short-duration rainfall, it is likely that in a warming climate there will be an increase in post-fire debris flow events,” including some could be associated with narrow cold-front rain bands, de Orla-Barile said.

‘Rivers’ in the sky may flood East Asia under climate change

This document is subject to copyright. Except for fair use for purposes of private study or research, no part may be reproduced without written permission. The content is provided for information only.