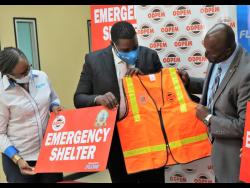 The Office of Disaster Preparedness and Emergency Management (ODPEM) will partner with Portmore Parish Disaster Coordinator today to facilitate an earthquake drill in the village of Sovereign in the borough to assess community awareness, preparedness and response to an earthquake and its potential secondary risks.

This is just one of the activities organized by ODPEM to encourage Jamaicans to become more proactive as it steps up its public awareness campaign under the theme: “Reshaping earthquake response practices during COVID-19 as he observes Earthquake Awareness Week starting in January. 16-22. This year, the focus is on building the public receptivity of Jamaican children and youth to reduce their vulnerability to earthquakes.

To this end, ODPEM has posted earthquake awareness videos on YouTube pages and ODPEM websites and schools will be able to access these videos for awareness and education purposes.

On Wednesday, FLOW donated more than 1,000 shelter management vests and 250 emergency shelter panels, worth more than $3 million, to ODPEM to support its national shelter management program in his office at 2-4 Haining Road, St Andrew. The vests are designed to ensure visibility for shelter managers and the signs will allow clear identification of all approved shelters.

In response, FLOW Jamaica’s Vice President and Managing Director, Stephen Price, said the telecom giant is very aware of the importance of preventing and mitigating the impact of disasters on Jamaicans and the local economy. , especially at this time when the country is struggling. with the ravages of an ongoing pandemic.

“The increasing intensity and frequency of disasters around the world demonstrates that it is essential to strengthen and support the government during times of disasters and to continue to do so in very practical ways.”

He pointed out that FLOW has achieved this, among other things, by allowing the use of two-way radios as a means of telecommunication in the event of a natural disaster or crisis situation. It had also facilitated the distribution of ODPEM emergency text messages to customers on its 24-hour network, so that people could stay in touch and know what was going on at all times.

In addition, he also facilitated the installation of UHF/VHF antennas at FLOW sites across the island and providing technical support to enable efficient transmission of emergency communications. Currently, it hosts the platform that facilitates public access to 24/7 weather alerts from anywhere in Jamaica by dialing 116.

Talk with the gleaner subsequently, Thompson emphasized the importance of equipping vulnerable populations with the knowledge to inform their disaster response.