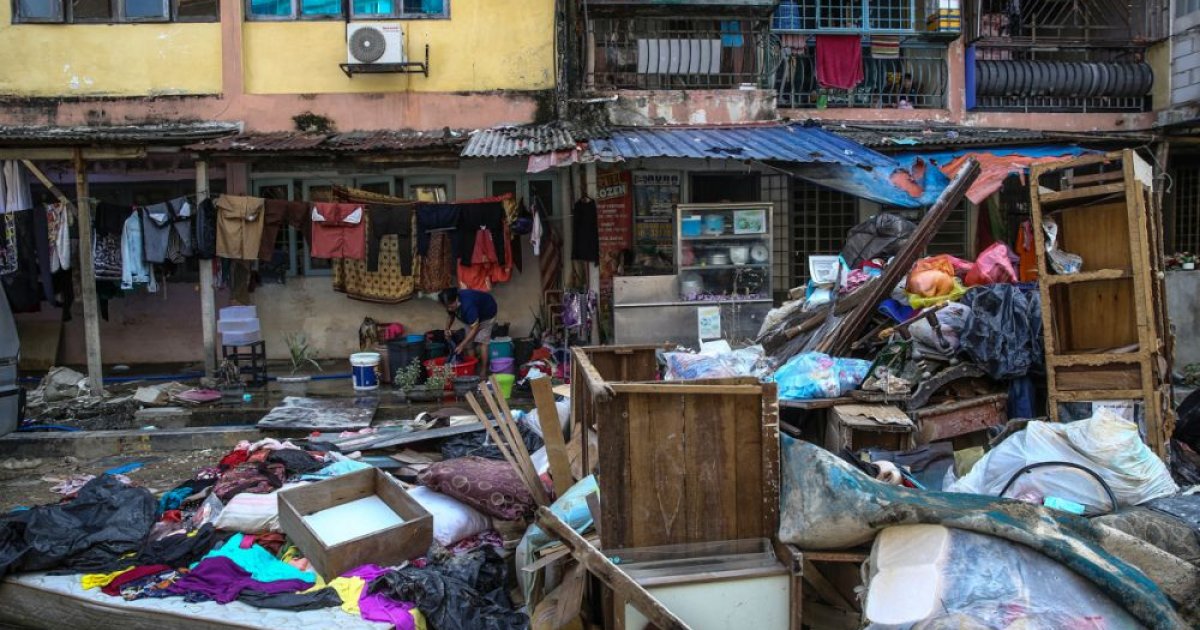 KUALA LUMPUR, December 30 – Dressed in her mud-stained shorts and t-shirt, Derismawa Arisno sat in front of her 42-inch flat-screen TV as she took a break from cleaning the bungalow that she shares with her two roommates.

A relatively new television adorned his living room. Now it serves no more than serving as a makeshift chair after being submerged in flood waters from December 18 to 25. Around him and Derismawa were sodden curtains, clothes soaked in mud and a bag of muddy rice, and remnants of furniture that turned into porridge and pulp.

“When we got home from work, the water had already entered the house. We were only able to get clothes. Everything else is gone. We were all in panic, â€she said.

Amid the ruins, she and other residents wonder why there have been no warnings and how the flooding has become so severe. Kampung Tengah in Banting, where she lives, is a working class neighborhood, with most residents working at the nearby Kuala Lumpur International Airport. Surrounded by oil palm plantations, there is usually no flooding, residents said.

Forty-four kilometers to the north, in Taman Sri Muda in Shah Alam, Raynugadewi Subramaniam, who prefers to be called Raynu, asked himself the same question. Like Derismawa, she said she was completely blinded by the flooding. Unlike Kampung Tengah, her neighborhood is prone to light flooding whenever it rains heavily, which she called “not that bad”.

On the morning of December 18, however, she noticed that the water was coming in faster than normal, which is why she and her mother left the house to park their car on a hill.

â€œIt was quite difficult, but thank goodness we managed to get to a higher area,â€ she told Bernama via WhatsApp. â€œWe waited until the water dropped a bit before we could walk home, but then I realized the water level was rising higher. “

Cut off from their home, she and her mother had to seek dry land, leaving behind all their possessions and their cat. (The cat is fine. He was rescued three days later.)

She returned on December 23 to find everything on the first floor, including precious memorabilia, destroyed and her neighborhood resembling “a war zone”.

As of December 27, floods killed 25 people in Selangor, including two volunteers, while tens of thousands of people were displaced. Hundreds of people were reportedly stranded on rooftops or upper floors of their homes without food or electricity for more than a day.

Ironically, Selangor is the state considered most disaster-prepared in Malaysia by the United Nations, according to disaster preparedness expert Dr Khamarrul Azahari Razak.

â€œWhat happened was the impact of climate change and an extreme weather event that day (December 18). Keep in mind that Met Malaysia (Malaysian Meteorological Department) issued the warning, and … (the weather change) happened within a short period of time, â€he said.

He added that experts, including him, had focused on the northeastern coastal states, expecting rain to fall on them as usual, when the system instead headed south. -West to the Klang Valley.

Authorities attribute the flooding to the amount of precipitation – over 300mm of rain fell in one day, which is equivalent to the average precipitation for an entire month. Coupled with high tides, low regions, full rivers, and oversaturated land, the combo has proven too difficult for current flood mitigation measures.

While climatologists and local experts have predicted more precipitation and flooding in this region in the future, including in areas that are not generally flooded, the floods of December 18 still took many experts by surprise. .

â€œTo be honest, in my more than 30 years of service, I haven’t seen any flooding similar to the one in Kuala Langat over the past week. Shah Alam too, â€National Water Research Institute Director General Datuk Nor Hisham Mohd Ghazali told Bernama via WhatsApp.

While the public is accustomed to some flooding in the lower areas of Klang Valley and Selangor, especially near rivers, few expected areas to remain inundated within days after the rains stopped.

It took a week for the water to drop in Kampung Tengah in Banting. In Taman Sri Muda, authorities had to use emergency mobile pumps to drain the water, allowing residents to return five days later to clean their homes.

Rivers and drainage expert Dr Kalithasan Kailasam from the Global Environment Center (GEC) said the monsoon season meant rivers and dams were full, making it difficult to evacuate the river. water and, therefore, it returned to the houses.

Since the amount of rain that fell on December 18 and 19 was almost double the average December precipitation, future water catchment projects should be able to hold 300 to 400mm of water at any time, Selangor said. Mentri Besar Datuk Seri Amirudin Shari on December 27.

The public is now asking what is being done to prevent a repeat of the Klang Valley flooding in 2021 in terms of mitigation and response.

Prepare for the future

Flood mitigation has two components: one is structural and the other is non-structural. Experts said increasing structural flood mitigation measures, such as the number and capacity of retention ponds, dams, dikes and diversion channels, will help the Klang Valley and the rest of the Malaysia to face the threat of climate change.

On non-structural solutions, experts and members of the public said state and federal governments should improve their disaster response and management plans.

Raynu said that as far as she knows, volunteers have rescued neighbors and friends stranded in Taman Sri Muda, not the government.

â€œIt could have been avoided or better managed by the authorities. I feel like it’s a big failure on their part, â€she said.

“It is inevitable that the inflexibility (of the top-down disaster management system) will make them obsolete in the face of the challenges of the 21st century where ‘bottom-up’ information plays an important role with the social media revolution and raising public awareness with a impact the reputation and goodwill of the government, â€he said.

“If you strengthen the local government – the state, the local councils, the local city councils – you are actually improving the whole mechanism of the whole disaster management program, instead of focusing only on the Nadmda. (National Disaster Management Agency) “, he said.

Nadma was established in 2015. On October 5 of this year, its chief executive Datuk, Dr Aminuddin Hassim, said the agency was developing a harm reduction policy. He did not respond to requests to update the policy.

The ‘bottom-up’ approach should also include the audience.

Dr Kalithasan, who is the head of River Care for GEC, hoped the floods would also serve as a wake-up call to the public, saying they play a very important role in disaster management and preparedness.

â€œWe have to follow the 2021 climate change model where it is unpredictable. We have the possibility (that it) floods anywhere. It can happen anytime without following the monsoon like the last time when (only) Kelantan, Terengganu will be flooded in December, â€he said.

Nor Hisham, who is also the former director general of Malaysia’s Irrigation and Drainage Department, said there should be no development in the flood plains.

â€œIn some areas, why build in the first place? He asked.

But if there is a need to expand, experts said the requirements should anticipate the effects of climate change, such as higher rainfall and extreme weather events. There should be tighter brakes on deforestation. The authorities should also not compromise on regulations and not approve any development that does not meet the requirements.

â€œWe take care of it (nature). We are developing ecotourism zones so that we can get money to benefit local communities, â€he said.

Neither Hisham agreed, saying that any development that is made should not interfere with the hydrological process or the natural processes of the river.

â€œSo this mixture of development and nature – where the natural system is not disturbed but the human community can also thrive – has to happen. And in a country that receives so much rain like ours, it is crucial for the future, â€he said. – Bernama