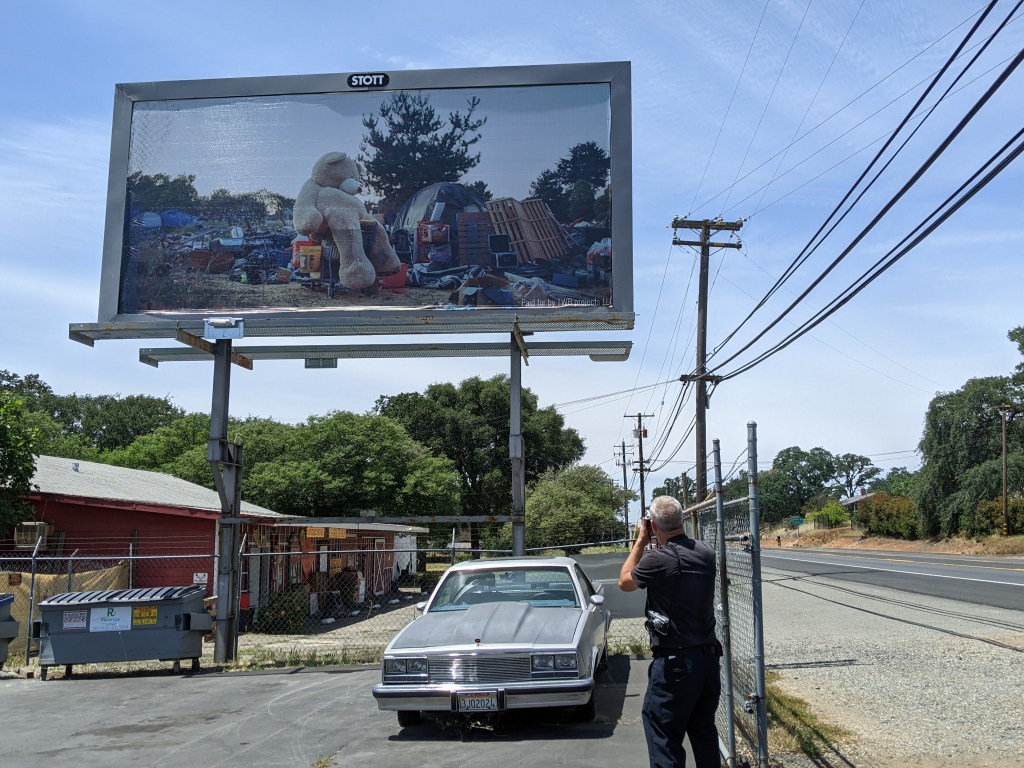 OROVILLE — Commercial photographer Thomas Broening wants his new photography exhibition to elicit a reaction, even if it’s a negative one.

Six days ago, Broening’s photographs ended up on six billboards located around Oroville. The photographs depict three crises affecting California: drought, wildfires and homelessness. The photographs do not contain any text, call to action or political message. They’re simply visual reminders of the challenges Californians face for people to spot on foot or by car.

The billboards will remain in Oroville until June 12, when they will then be moved to Oakland, where Broening lives, and the town that inspired one of his photos, which depicts homeless people in tents. under a highway overpass.

“These things affect the whole state,” Broening says. “My goal is not to solve the problem of housing or climate change. I remain neutral.

Broening said these disasters create such a gap, given that California is such a wealthy state and is part of the United States, which is a very wealthy country.

Broening has been taking pictures since he was 16 years old. He worked as a photojournalist and took pictures for national magazines. He’s taken photos of Facebook CEO Mark Zuckerberg, basketball player LeBron James and Apple co-founder Steve Jobs, but now does commercial photography.

“It’s something I can do,” he said of his show at Oroville. “Photography is something I really know how to do.”

Broening, who has lived in California for 33 years, paid for the billboard space out of pocket, which he said was quite expensive.

So far, the reaction from people who have seen the photos has been less than positive.

“People say photos are ugly, and why would anyone do that? he says, but he’s happy to get reactions to the photographs because it shows people are paying attention.

“I want this to be recognized as a statewide problem,” Broening said. “The fires don’t care where you live, they don’t discriminate.”

The burning convertible billboard is powerful since Broening says convertibles represent “freedom and driving on Highway 1”, and it’s hard to see it on fire.

Broening says the photo of Lake Oroville, which depicts drought, is his favorite. “Everything I’m trying to say is in the picture,” he said. “It’s strange, beautiful and devastating all at once.”

Some of the billboard images may have dual meanings, such as the photograph of a burnt tree, which may represent both drought and forest fires. “It can connect two or three crises at the same time,” he said.

Oroville was chosen as the photography setting because Broening spent time in Oroville and sent his daughters there for summer camp.

After Oakland, the images will be displayed on billboards in Southern California. Usually the purpose of billboards is to advertise an event or sell a product, but Broening billboards are erected to educate.

“I don’t want people to look away,” he said. “I don’t want them to go through that.” Broening’s goal was also to get his story told in the local media before the national media picked it up.

He took a few hundred rolls of film, ending up with hundreds of photographs, before choosing which photographs ended up on the billboards.

Broening’s father worked for the Associated Press and Broening says his skills as a journalist and his love of photography were passed on to him by his father. This exhibition is Broening’s baby and what he will focus on for the foreseeable future.