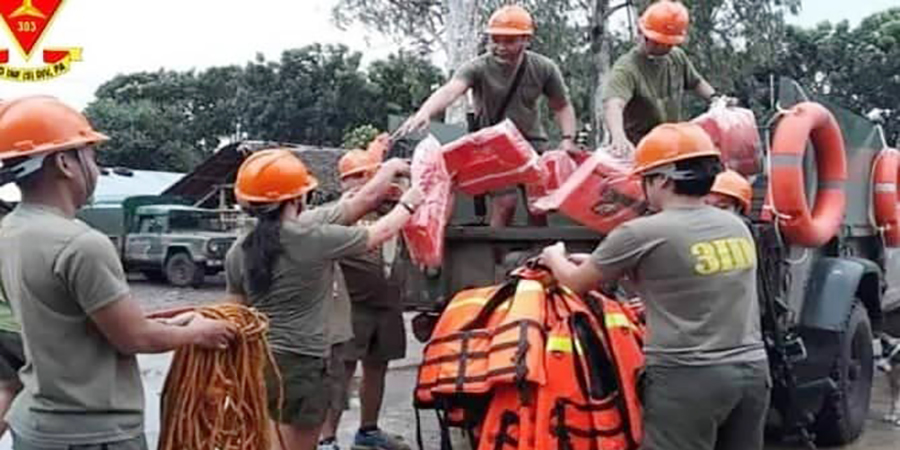 The Philippine Coast Guard yesterday suspended seagoing vessel travel between the Port of Escalante City in Negros Occidental and the Port of Tabuelan in Cebu, following the effects of Tropical Depression Agaton.

Tabuelan has been placed under the number 1 tropical cyclone wind signal by the Philippine Atmospheric, Geophysical and Astronomical Services Administration (PAGASA).

This also developed when the Provincial Disaster Risk Reduction and Management Council (PDRRMC) in Negros Occidental placed all disaster response councils and operations centers on red alert to prepare for the imminent threat of tropical depression “Agaton”.

A memorandum issued by Provincial Administrator Rayfrando Diaz on behalf of Governor Eugenio Jose Lacson’s authority said the move to red alert status, since April 9, is for close monitoring, consolidation of reports and coordination with government agencies and relevant stakeholders.

Pasaporte said the Philippine Army in Negros is in a high state of readiness, readiness and commitment. We are always ready and alert, both in case of natural calamities and man-made disasters, especially in anticipation of TD Agaton, because people’s lives and safety are most important, he stressed. .

Under red alert, there will be activation of response clusters in the region, resulting in the evacuation of residents living in high-risk areas by local DRRM councils, communication of weather advisories to the community level by provincial councils in the DRRM and LDRRMC. .

Referring to agreements made at meetings of pre-disaster risk assessment analysts and the Region 6 Core Group for the mentioned weather system, Diaz said the Emergency Preparedness and Response (EPR) of the PDRRMC have been activated for the Charlie protocol, which will be subject to change, depending on updates on the danger situation and risk levels.

The Western Visayas Regional Council for Disaster Risk Reduction and Management has placed all local government units in the region on “red alert status” as the low pressure area spotted east of Eastern Samar has transformed into a tropical depression which will be known under the name “Agaton”.

RDRRMC Officer in Charge Ma. Aletha Nogra said in Memorandum 22 released on Saturday, a copy of which was provided to the Office of Public Information by Dr. Anna Maria Laarni Pornan, Chief of Bacolod City DRRMO.

PAGASA reported that “Agaton” continues to move west to the coastal waters of Balangiga in eastern Samar. PAGASA said the Western Visayas could experience light to moderate rain, with occasional heavy rains.

It has maximum sustained winds of 45 km per hour near the center and gusts of up to 55 km per hour, and is moving slowly west northwest.

The Philippine Administration of Atmospheric, Geophysical and Astronomical Services reported that the Western Visayas could experience light to moderate rain, with heavy rain at times.

Four other regions – Caraga, Northern Mindanao, Central Visayas and Eastern Visayas – have also been placed on “red alert status” with their emergency preparedness response already activated for Charlie Protocol, including the entire region 6.

Region 6 includes the heavily urbanized cities of Bacolod and Iloilo and the provinces of Aklan, Antique, Capiz, Guimaras, Iloilo and Negros Occidental.

Placing all five regions under Charlie Protocol for their EPR means that said LGUs are considered “high-risk areas” and residents of these locations, especially those who live near bodies of water or coastal communities, should take precautionary measures.

With Charlie Protocol in place, the National DRRMC said LGUs in these areas must send warnings and advisories, cascading preparedness instructions; activate the emergency operations center on red alert, activate the majority or all response clusters;

Account for, assess and ensure the operational readiness of response facilities (such as EOCs and evacuation centers), as well as critical lifelines (water, communications, electricity, etc.);