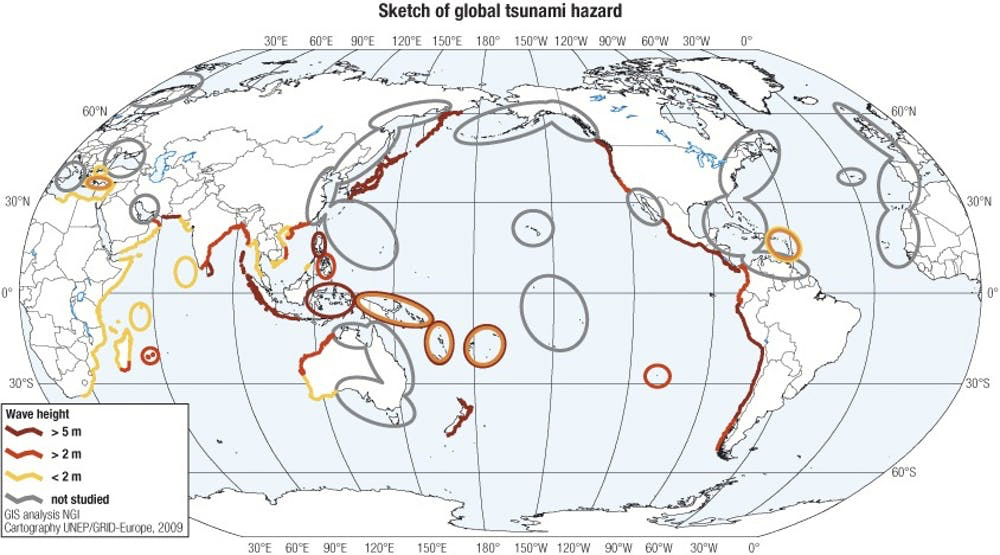 An undersea volcano eruption and subsequent tsunami that hit Tonga on January 16 was one of the most violent natural disasters in decades. Although this event had catastrophic consequences, such incidents are relatively common because volcanoes are naturally unstable, unpredictable and exist all over the world.

I have spent most of my career conducting field research after disasters, improving coastal defenses and helping people become more resilient to tsunamis and less anxious about risk. The challenge facing countries in these naturally vulnerable regions of the world is to adapt and educate their citizens to take their own security measures.

Here I have described four things that vulnerable countries must do urgently to mitigate the consequences of tsunamis:

1. Educate people to be more resilient
Education is one of the most effective defenses. Regardless of the size of the wave or the strength of the levees, people have a much better chance of surviving a tsunami if they know exactly how to react once an alert is triggered. Vulnerable countries must therefore urgently create an educated, cohesive community that is aware of its exposure to risk and accepts it as part of its life and culture.

“In Tonga in particular, where a third of the population is under the age of 15, tsunami safety needs to be taught at primary and secondary level. Familiarizing their young population with tsunamis, as well as other natural hazards such as cyclones, will create a more resilient and less anxious adult population.”

I conducted focus group meetings with people, businesses and communities in Indonesia after the 2018 Anak Krakatoa tsunami. In these groups, we established designated elevated areas and clear signage directing people to these safe areas. Evacuation events, such as mock tsunami drills, should be practiced regularly so people know safe areas and know where to go in the event of a real tsunami.

In Tonga in particular, where a third of the population is under the age of 15, tsunami safety must be taught at primary and secondary level. Familiarizing their young population with tsunamis, as well as other natural hazards such as cyclones and earthquakes, will create a more resilient and less anxious adult population.

2. Create effective early warning systems
A drop in the level of the surface ocean waters is a clear sign that a tsunami is about to strike. Vulnerable countries should create early warning systems using satellites, drones and tide gauges to measure the vertical rise or fall of water to identify tsunamis before they occur.

In light of the Tonga tsunami, it would also help place equipment such as conductivity-temperature-depth instruments, seismometers and thermal cameras near submarine volcanoes, while observing the waters above with satellites. Buoys that measure the height and direction of waves can also be placed at sea.

When water levels are triggered, tsunami warning messages are sent, giving people enough time to escape the impact zones. I experienced this myself during fieldwork in a small town on the southern coast of Japan in 2018. There was an earthquake while I was there and before the ground even ceased to tremble, my colleague received an SMS alert from the regional government with instructions. I grabbed my passport and prepared to head for a nearby hill if he got a follow-up “red alert” text – luckily this particular earthquake didn’t cause a tsunami, and we have could stay where we were.

3. Set up a strong coastal defense system
Tsunami-vulnerable countries urgently need to build strong coastal defense systems of offshore breakwaters, tsunami walls and flood levees. The tsunami waves hit hard, so ideally these foundations will be reinforced concrete to prevent erosion. Natural protections such as coral reefs could be enhanced by nature-based solutions such as rock armor or heavy sandbags, which will reduce costs for developing countries.

A new coastal seawall in the city of Sendai, Japan, built after the 2011 tsunami. PHOTO: Ravindra Jayaratne, author provided

Critical infrastructure such as power plants, densely populated communities and tourist hotspots should be built on higher ground whenever possible. A good example of this comes from Miyagi and Iwate prefectures in Japan, which were badly hit by the 2011 Tohoku tsunami (the one that caused a nuclear disaster in the nearby city of Fukushima). Some towns were rebuilt on high ground that had been filled in with compacted earth.

If space is available, coastal forests with tall trees could be planted between communities and the beach to act as a buffer zone, limiting wave impact and reducing flooding, while improving the local ecosystem.

These tusks can harm the tourist aesthetic of white sand beaches, but they could save lives.

Help must be provided before tsunamis strike, not just after. This can be done by sharing data, expertise, research facilities and equipment. It is vitally important that this information is provided specifically to developing countries to help them strengthen their own defences.

The underwater volcano near Tonga is active. And even if the recent eruption was a 1,000-year event, there’s still a good chance it will erupt again since geological records show that major eruptions like this tend to involve a series of many events. individual explosives.

Countries threatened by tsunamis cannot prevent these natural disasters from occurring, but they can adapt to be better prepared in the event of a disaster. Foreign aid will be vital for Tonga to recover from this horrific incident. However, education and collaboration will be its most important defense in the longer term.

Ravindra Jayaratne is a Lecturer in Coastal Engineering at the University of East London. This article is republished from The Conversation under a Creative Commons license. Read the original article.