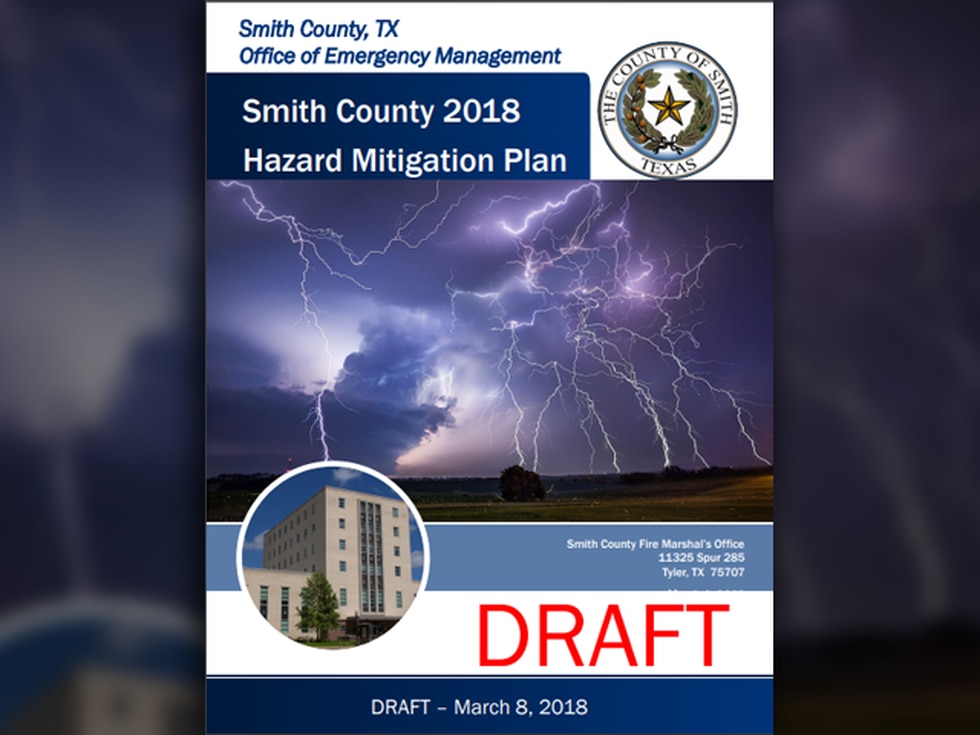 â€œFor this plan, the steering committee considered the full range of natural hazards that could impact the planning area, and then identified the hazards that are of greatest concern to the county,â€ the report said. The committee responsible for the report met three times between June and December 2017, in collaboration with the Texas Division of Emergency Management.

The Smith County plan was updated and last approved by FEMA in 2011, and the document states that is why Smith County OEM decided to develop “a whole new plan.”

The Federal Disaster Mitigation Act, passed in 2000, requires counties to file a plan showing a proactive approach to disasters in order to be eligible for federal disaster grants, as well as disaster recovery grants.

This plan is only a draft, awaiting submission and approval. Read the full plan here.

The nearly 400-page document is both a question and an answer. If a natural disaster were to occur in Smith County, what kind of response would we be able to provide?

After describing what type of disaster Smith County is most at risk for, the committee drew up a list of resources in place in which city.

The committee then made recommendations to reduce the risk of loss of life, injury and property damage during severe storms, tornadoes, droughts, floods and forest fires. The plan also includes a review of the county’s natural and man-made systems, such as dams.

What threats have been identified?

Drought, extreme heat and severe storms accompanied by lightning, hail and high winds have been identified as the main hazards due to their common occurrence in Smith County.

The report says Smith County has experienced six droughts in the past 10 years.

“On average, Smith County and the participating jurisdictions have experienced 95 days per year when temperatures exceed 90 Â° F, so the likelihood of extreme heat events should be very likely in any given year,” the report.

The drought risk mitigation plan includes better informing the public about available insurance, the use of drought and extreme heat resistant plants around county buildings to minimize water consumption, and implementing water conservation measures in city and county buildings and in homes if necessary.

On the other side of the spectrum to consider, there is too much rain.

Of the 112 dams in Smith County, the majority (54) are in the town of Hideaway, making this town the most at risk of dam failure. Eight dams in the county are rated high risk, 15 are rated high risk and 89 are rated low risk. Two are listed as unknown.

“The Town of Hideaway has rated the probability as high, which means that a dam failure is likely to occur within the next 25 years, as this is a lakeside community with two high risk dams,” indicates the report.

Recommendations include working with homeowners where private dams are in place and removing trees from earthen dams on Hideaway Lakes # 2 and # 3 to stop erosion and promote soil adhesion.

Once the threats were identified, the team made recommendations to reduce the danger. Responses are color coded red, yellow and green based on the degree of danger the change would mitigate.

For example, a recommendation coded in red is described as “An additional outdoor warning siren is needed near the city center. Buy one and install one.”

Overall, the committee also determined that every volunteer fire department in the county needed a back-up generator, and every school, business and critical facility needed to be equipped with a NOAA All-Hazard radio.

What capacities do we have?

The report requires a â€œrisk mitigation capacity assessmentâ€ for each town in Smith County. Officials responded to a list of ordinances, codes and plans with a yes or no, and comments on each.

Officials assessed the legal and regulatory resources, as well as administrative and technical capacities, for each city in the county. Basically, this means that they have looked at the type of resources available and the disaster plans in place.

Part of this survey looks at the number of outdoor warning sirens in each city and around the county.

Bullard, Noonday, and Hideaway don’t, Troup has two, Arp has one, and the Town of Tyler has 32. The plan is to add an additional siren near downtown Tyler within 48 month.

What did the people say?

The plan was formed with information from 249 responses to a voluntary questionnaire.

The 36 questions were designed to assess the level of knowledge of local residents about disaster-related issues and to identify vulnerable areas.

For example, one question asked respondents if they had flood insurance, to which 72 percent of respondents answered no.

Forty-one percent of respondents did not know if their property was located near a seismic fault. However, just under 3% of those surveyed said they had taken out earthquake insurance.

When asked what types of projects they think county, state, and federal government agencies should conduct in order to reduce the damage and disruption caused by dangerous events in Smith County, the Majority chose work on infrastructure including roads, bridges, drainage and water supply, followed closely by strengthening essential facilities such as police, firefighters, schools and hospitals.