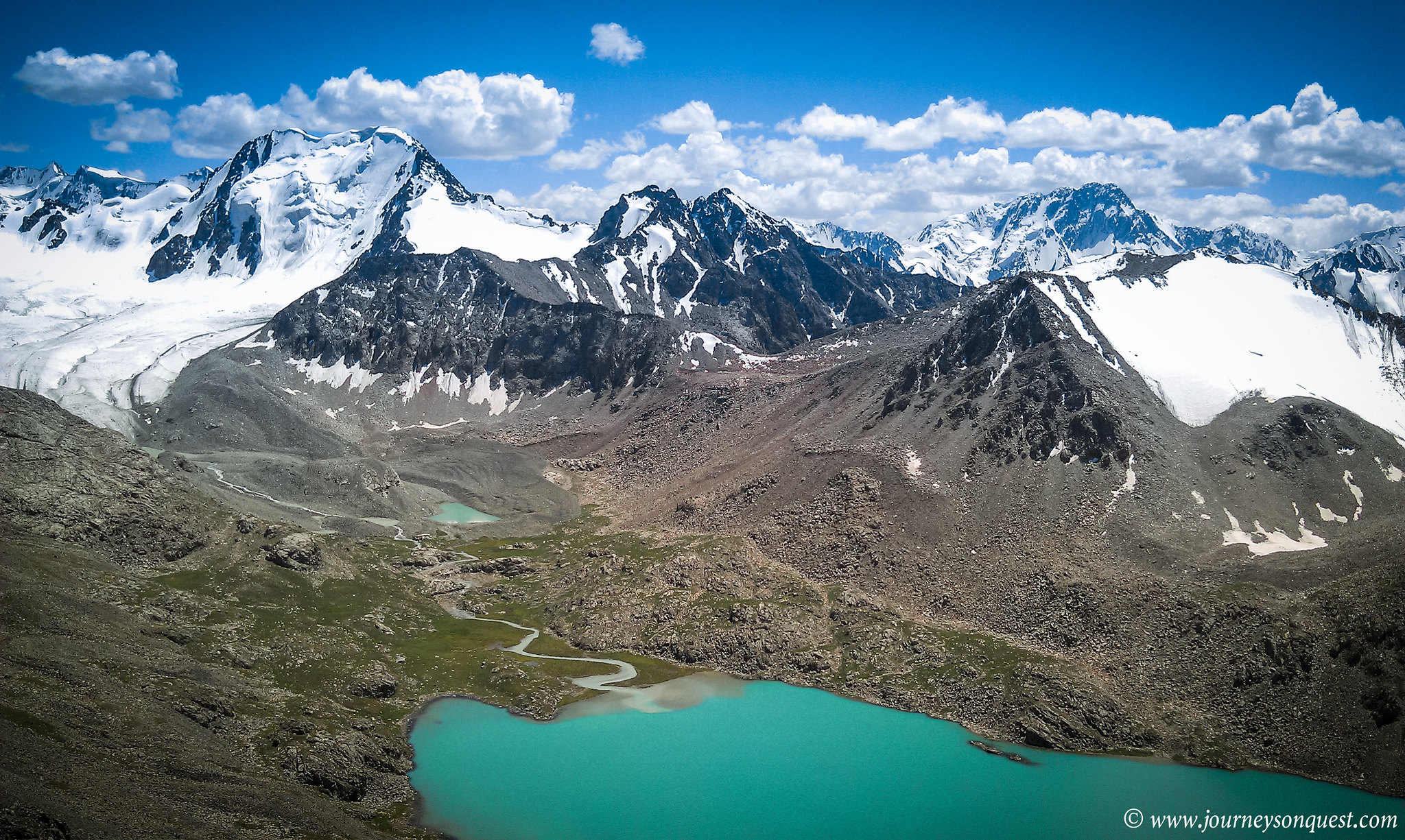 On July 8, a glacier collapsed in the mountains of the Issyk-Kul region in Kyrgyzstan, triggering an avalanche. There was little awareness of this incident for two days, until it was made public by foreign tourists who witnessed it. These events took place at the Dzhuku pass on the Terskey Ala-Too ridge, next to the largest gold mine in Central Asia, Kumtor.

Harry Shimmin, a British tourist, told local media that the mass of ice melted as a group of tourists crossed the Dzhuku pass. Thanks to a happy coincidence, the tourists had not yet passed the stretch directly in its path, which a few minutes later was covered with a mass of ice. “If we had walked 5 more minutes on our hike, we would all have died,” Shimmin wrote on Instagram. He continued: “We went through [the section] then walking among massive blocks of ice and boulders that had been thrown far further than we could have run, even though we acted immediately. Without their presence in the area at the time, no eyewitness accounts of this disaster would have been available.

Kairat Moldoshev, a professor at the Department of Ecology and Tourism at the Kyrgyz Pedagogical University in the national capital of Bishkek, said the disappearance of the glacier is a consequence of climate change. Due to high air temperature and a heat wave that hit Central Asia last year, much of the glacier melted and some of its ice collapsed into the valley.

Now, as Moldoshev suggests, it is necessary to start the systematic observation of the pass in which the glacier descends, since the mass that reaches the lower altitudes will melt and can cause mudslides.

Central Asia’s glaciers, like other regions, are melting. Partial destruction of a glacial ice mass is a common phenomenon in the mountains of Kyrgyzstan. However, such a large-scale collapse rarely occurs. And it is even more unusual for such an event to be captured on video.

In June, the government of Kyrgyzstan proposed to parliament to give international investors the option of using all metal and gold mines to provide additional income for the country’s weakened economy. It has been announced that major investors will be invited to participate in open tenders for the development of Jetim-Too iron ore mine in Naryn, Sandyk aluminum mine in Jumgal, copper-gold mine Bala-Chychkan in Talas and Kuttuu Mine-Sai-II Rare Metal Mine in Kemin. But scientists from the state geo-environmental agency’s safety department have warned that mining operations will have negative impacts if steps are not taken to protect glaciers, fragile slopes and ecosystems.

Under previous government authorities, the initiative to open and develop the Jetym-Too and Sandyk mines met with opposition from local people and sparked major protests. Local people have long feared that mining operations will harm pastures and soils.

Isakbek Torgoev, director of the Geoecological Monitoring Laboratory at the Kyrgyz National Academy of Sciences, told Azattyk Media that no environmental security measures are planned and open-pit mining of these deposits poses a threat. for the mountain range ecosystem:

“I am completely against the open pit mining of the Jetym-Too iron mine. If we dig and work in the open, it will cause great damage to the environment. Indeed, in the ridges of the Jetym-Too, as in Kumtor, there is a source of water for the Naryn river. If we start digging a mine, very large quarries will be created to extract the iron ore concentrate, and millions of tons of rock will be extracted. The crust of the mountain ranges will be damaged and the permanent ice and glacier system will collapse.

The Tian Shan mountains in Kyrgyzstan. Photo: The Caravanserai/Flickr

Dzhuku Gorge, the site of the disaster, is one of the most beautiful places in Issyk-Kul; a large number of tourist routes pass through the gorge. It is also close to the Kumtor gold mine. According to environmental activists and researchers, two large glaciers at the Kumtor mine are in serious danger. Mining operations contribute to their shrinkage, either through the direct removal of ice or through the deposition of trash and other dark materials on their surfaces. The accelerating decline of glaciers can cause serious environmental problems not only in Kyrgyzstan, but in the entire region of Central Asia, for which glaciers are an essential part of the supply of water resources.

The glaciers of the mountain ranges of Kyrgyzstan are not only an element of the landscape, but are also important accumulators of moisture. Snow and ice concentrated there are released as meltwater during the warm time of the year. This role of glaciers is increasingly important today, due to drought and water shortages in the region, although the accelerating loss of glaciers – signaled by this disaster – calls this role into question.

For major rivers in Central Asia, such as the Syr Darya, Kyrgyzstan’s glaciers have become an essential source of water during the warmer months. In Kyrgyzstan, more than 8,000 glaciers and eternal snow covering 8,100 square kilometers represent about 8% of the country’s territory. The fate of glaciers is a pressing issue for Kyrgyzstan.

Kyrgyzstan is one of 195 countries that ratified the Paris Agreement in 2015. All ratifying states are required to take appropriate measures to prevent the planet’s temperature from rising more than two degrees Celsius. . The President of Kyrgyzstan, Sadyr Japarov, delivered a speech at COP 26, the major global climate summit, last November, stressing the importance of this issue. He was the only Central Asian leader to attend the event and made a statement on melting glaciers, urging world leaders to take action and commit to saving Central Asia’s glaciers. As the recent disaster powerfully demonstrates, the glaciers in this region – and the people and ecosystems that depend on them – face increasing threats. The time for consultation, in this region as elsewhere, has come.