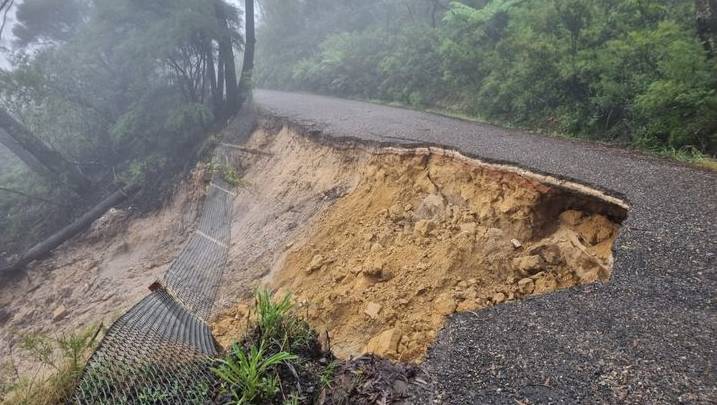 The seemingly endless rain bomb has wreaked havoc on trains and mountain roads over the weekend and this week. Commuters were forced to take buses as the rail line between Springwood and Lithgow was closed after two landslides – one in Katoomba, the other in Zig Zag – on Monday.

At one point, the highway was cut off by floodwaters in Valley Heights, causing long delays.

A spokeswoman for NSW Transport said two shuttle trains started running back and forth between Penrith and Springwood on Monday evening. Commuters were urged to allow extra time and avoid unnecessary travel.

“The impacts will continue for the rest of the week as we undertake detailed inspections to ensure the rail network remains safe for trains and customers,” she said, adding “buses should replace services between Springwood and Lithgow until at least Friday”.

Emergency services were at the scene of the major landslide in Katoomba on Monday caused by intense rains.

“Firefighters have set up exclusion zones around Gang Gang Street as the area is unstable,” a fire and rescue spokesperson said. “The nearby rail line is also at risk and RailCorp has closed the line in both directions until engineers can assess the damage. The council is assisting NSW Police.”

The deluge saw 420mm of rain in Katoomba in the first week of March alone. This is more than double the monthly average of 172mm and comes on top of the 845mm that has fallen since November.

The Blue Mountains have now been declared a natural disaster area. The town hall invites the inhabitants to limit their movements in the city.

“This is the third major storm and flood we have experienced in as many years, and it is impacting our natural environment, infrastructure and community,” said Blue Mounains Mayor Mark Greenhill. “Being added to the list of natural disaster areas is a good thing. It opens the door to resources and support mechanisms that will be critical to managing the crisis and the cleanup to follow.”

“In my 40 years of SES, this was the wettest event I’ve experienced for the Blue Mountains.”

In Mount Victoria, the road has been partially closed near Fairy Bower Road since Friday due to damage to the bridge over the railway. Only the westbound lane is open and traffic is regulated by stop/go signs.

NSW Regional Transport and Roads Minister Sam Farraway said urgent repair work was carried out on Sunday evening and permanent repairs would be carried out over the next few weeks.

Record rain has caused Blackheath Library to close due to extensive water damage. A large number of outdoor works, including mowing, maintenance of sports fields, park work and burials, are suspended.

“Domestic waste collections are proceeding as normal. If your street is closed, please leave your bins outside and our trucks will return as soon as possible,” the council said.

“The storm and flood damage in the LGA is extensive, and resources will be stretched beyond capacity to get things back to working order and safely,” the council said.

On Monday, Megalong Public School was closed. Last Thursday, Glenbrook Public was closed for a day due to flooding. Nepean Performing and Creative Arts High School in Emu Plains was closed the same day and remained closed Monday. Updates to education.nsw.gov.au/public-schools/school-safety.

The huge dump of rain continued a pattern that began in November, when 280mm fell at the Mount Boyce weather station, well above the monthly average of 105mm. The rain continued all summer: December 129 mm (against an average of 86), January 222 mm (average 121) and February 214 mm (average 142). It was also wet, with 55 days of rain out of a 90 day summer.

February had only eight days without rain, January 11 and December was the sunniest with 16 dry days. But March seems to be a record. The average rainfall (134 mm) was exceeded in the first three days and the average for the whole month more than doubled in the first week. It has rained every day, and sometimes all day, since February 19.

The summer was not only wet but also cool, particularly in January, when the average temperature was 22.7, well below the average of 24.3, and even more so in February, which was two degrees higher. fresh than average, registering 20.9 for the month, compared to the long-term mark of 22.9.

Residents took to social media to post photos of their streams. The good news is that the latest forecast from the Bureau of Meteorology calls for only tiny rainfall, up to 6 mm, for the next five days. If you need assistance in the event of a thunderstorm, contact the SES on 132 500.