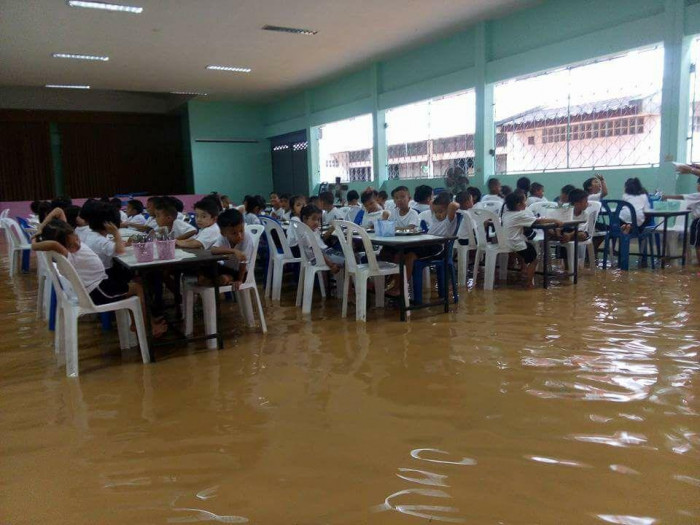 A school in Phuket was inundated during flooding caused by torrential downpours. Urban areas around the world are vulnerable to natural disasters induced by climate change. Photo by @K5_Rescue on Twitter

The latest report from the Intergovernmental Panel on Climate Change (IPCC) describes how climate change is already causing widespread disruptions, affecting natural and human systems around the world. The effects of global temperature warming above 1.5°C through intensification of extreme weather events are inevitable and irreversible. A strong message from the IPCC report is to act now.

Solutions and adaptation measures exist, but greater efforts and actions are urgently needed to move from planning to implementation. Thailand has a National Adaptation Plan 2020-2037. But the big question is what is being done locally?

Cities and local communities are on the front lines of the impacts of climate change. Adaptation should be guided by local priorities. Local actors and communities must be at the center of decision-making, leading the design and implementation of adaptation interventions. The voices of vulnerable, marginalized and poor community groups must also be included in decisions to ensure inclusive and equitable adaptation actions.

Responding to climate change requires an understanding of climate impacts, vulnerabilities and future risks associated with climate change. A useful approach, climate vulnerability assessment, is often used to identify local priorities and inform policies and measures that adapt to climate impacts. However, climate vulnerability assessments generally identify who is vulnerable rather than why. To reduce vulnerability, understanding the underlying causes is a vital part of the response, hence the need to go beyond identifying “who” is vulnerable.

An EU-funded project, titled Strengthening Urban Climate Governance for Inclusive, Resilient and Sustainable Societies in Thailand, seeks to better understand why some communities are more vulnerable to climate impacts and other non-climate shocks, and to empower groups local civil society means to play a critical role in inclusive and equitable climate adaptation and resilience efforts.

Recognizing the importance and urgency of climate impacts and vulnerability in the urban context, the European Union entrusted the Thai Environment Institute Foundation and its project partners, the Center for Civil Society and Nonprofit Management from Khon Kaen University, Songkhla Community Foundation and Maastricht University in the Netherlands, to build the capacity of civil society organizations in Thailand. The project will play a critical role in building the adaptive capacity of communities and improving urban climate governance practices.

A few communities are included in the research.

In the southern city of Songkhla, informal Boyang settlements and poor urban communities are located in low-lying coastal areas. In the northeast, informal settlements and poor urban communities reside along the railway line in Khon Kaen town and in the Ban Phai wetlands. These communities all live in naturally at-risk areas in poor housing conditions, with limited or no access to basic services and essential infrastructure, such as drainage and running water. As cities continue to expand with larger-scale infrastructure development, lack of land ownership means they face the insecurities and uncertainties associated with threats of eviction.

Poor urban communities and informal settlements are vulnerable to climate change not only because they are poor, but also because they lack essential social structures and basic infrastructure that support their livelihoods and day-to-day needs. . With limited or no access to welfare or state aid, any crisis, big or small, brings setbacks and an ongoing “recovery process”. Where they live and the poor quality of housing contribute to their vulnerability to climate-related crises.

Cities in Thailand are experiencing rapid urbanization, uncontrolled urban sprawl and drastic land use change with poor or non-existent urban planning and design. They are also important contributing factors that lead to unequal impacts between different social groups and increase disproportionate exposure to disasters.

Ignoring increasingly complex climate, water and land use challenges, the development of new special economic zones and corridors in climate-sensitive and at-risk areas is accelerated through the implementation of the Thailand 4.0 strategy and the recent urban planning policy reform.

With ambitious plans to lift the country out of the middle-income trap, the new urban planning policy should accelerate the construction of large-scale transport infrastructure, such as high-speed trains, and support investment and development in economic and industrial zones. . This translates into high costs of reducing public participation and environmental impact assessment processes.

The poor are not the only ones vulnerable to climate impacts. The way cities urbanize increases exposure to multiple hazards and creates new patterns of risk. Without effective responses and actions to complex urban and climate issues, everyone becomes more vulnerable.

In the scientific field of climate change adaptation, attention has been drawn to capacity as a common explanation in risk and vulnerability assessment frameworks, such as adaptive capacity to adapt and react to change, or the ability to bounce back. But what shapes adaptive capacity?

Although poorer communities experience similar socio-economic problems, the local causes of vulnerabilities and adaptive capacity vary across communities, households and gender. Social, political-economic and structural variables must also be examined to better understand the determinants of vulnerability.

As climate impacts and vulnerabilities vary across localities, social groups and economic sectors, informed and equitable adaptation options must be developed taking into account the targeted and specified contexts, to avoid creating new problems through poor adaptation.

To demonstrate that the government “leaves no one behind”, the climate adaptation, disaster preparedness and development agenda must be centered on inclusiveness and equity, encouraging the involvement of all community groups in the co-design and implementation of actions and capacity building.