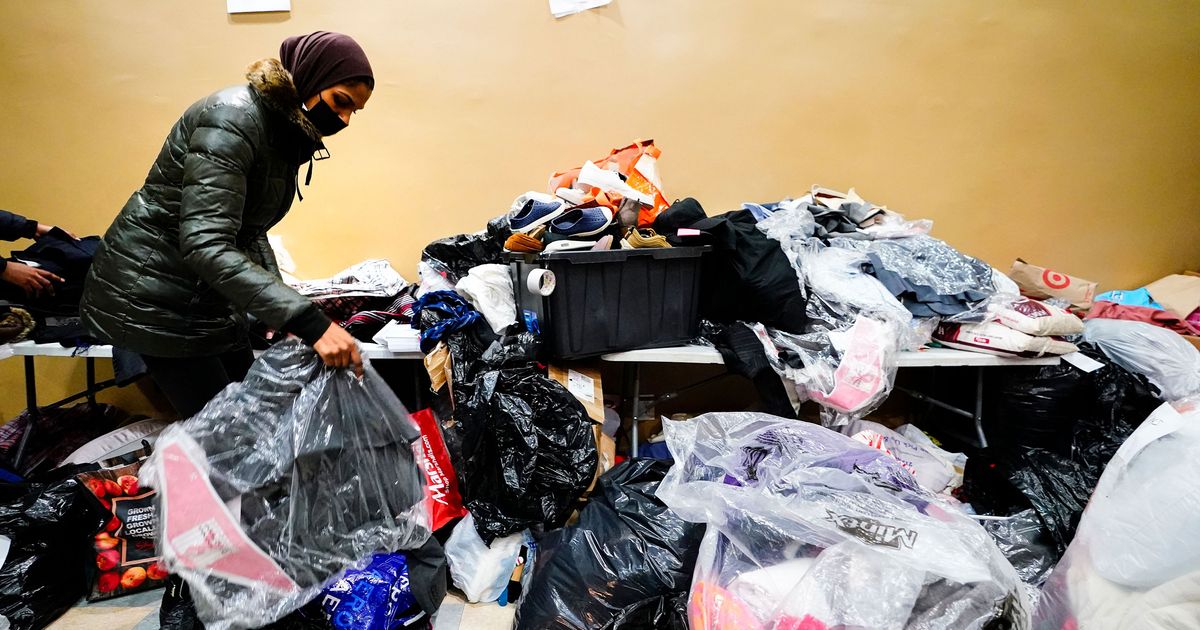 Here are some things the Gambian Youth Organization, on 181st Street in the Fordham Heights section of the Bronx, had in abundance this weekend: glittery puffy jackets; cod-beignet mix; I can read! Level 1 Children’s books; Kellogg’s bran flakes; auxiliary cables, all sizes; Red-white-blue paper tablecloths with the brand “Patriotic”; clipboards with the names of displaced families from the Twin Parks North West building a few blocks away; hand sanitizer, extra strong garbage bags.

The plentiful supply of toiletries available to the organization early on Saturday was drastically reduced at six o’clock. While the rush for recipients eventually subsided, the group stuck to the essentials. A battery of eight volunteers – all members of the local immigrant community that suffered the brunt of the losses in the Twin Parks fire, New York’s worst in three decades – sifted through mounds of donations in the office of a room, preparing bundles of items in case latecomers come through the door.

“It’s going to take a long time for people to recover,” said Momodou Sawaneh. “We’re trying to organize everything so that once that runs out we can bring in more.” Founder and former president of the GYO, Sawaneh established the group in 2002, just a few years after arriving in the United States from Gambia and earning his BA from the John Jay College of Criminal Justice. “I felt like a lot of people coming to this country, especially young people, weren’t exposed to the system,” he said. “I wanted to be a pioneer. Today, his organization serves a large population of Gambian Americans living on the steep slopes around the Grand Concourse, helping to connect area residents to healthcare, legal services, educational opportunities, and more. “We have other activities, playing football, basketball,” Sawaneh said. “It’s about having a sense of belonging.”

And then came the fire. Everyone at the GYO over the weekend knew someone affected by the fire: Of the 17 lives lost in the disaster, all but six were community members; one of them helped run the organization’s pantry and beauty pageant. The building at 333 East 181st Street has long been a major hub of Gambian life in the Bronx, and for many – including Sawaneh, who lives in the neighborhood – there was little need to turn to the internet or television the morning of January 9. to find out what had happened. Standing just outside the GYO’s storefront, a visitor can simply gaze to their left, where the street ends abruptly at the base of the looming 19-story tower, its lower floors now plastered in black.

Within hours of the incident, the GYO launched a sustained effort to assist the victims and their loved ones. For an all-volunteer organization with a typical annual operating budget of less than $100,000, the logistics have been quite overwhelming. “We received donations from all over the country. People FedEx stuff,” Sawaneh said. The material generosity of well-wishers was evident all around the group’s modest ground-floor space: in this corner, an as-yet-unopened trash bag from Queens Baptist Church in Queens Village; in another, a tote bag bearing the logo of Dignity Grows, a Jewish nonprofit in Connecticut dedicated to providing free hygiene products.

Keep track of everything — unpacking the donations, spreading the items on the tables, sorting them into boxes and on ceiling-high subway shelves – was the work of the GYO volunteer team, whose number reached up to 60 people , all crowding in hours between classes and graduate school jobs. “We want people to feel like they’re walking into a store,” said Jaharai Sillah, a tall young woman in her twenties. “It’s for them.” Working from a confirmed list of people affected by the tragedy, volunteers sift through the collection and fish out whatever the contestants seem to need, magically producing wide-eyed purple sheets, towels and soft toys. They aren’t shy about helping non-communities either: when a woman wandered off asking for change, the team tried to sell her free food and blankets. “Anything you need, honey,” Sillah said.

The current windfall of the GYO is not limited to cast-offs and scraps. Just four days after the Twin Parks fire, the group ended its official GoFundMe campaign after donations topped the $1 million mark. Aminata Sillah, a longtime Bronx resident employed at the Gambia consulate in Manhattan, has been busy trying to expedite visa applications for victims who had indicated their wish to be buried overseas. She is now also working on the hastily assembled committee that will determine how to disburse the GoFundMe endowment. It’s a lot to take on, but Sillah, who lost two family members to the fire, felt she had no choice. “I have to have multiple tasks going on at the same time,” she said. “If I was sitting around doing nothing, I would feel terrible.”

Along with the GYO, local masjids, city agencies and other non-profit organizations distributed relief items. Saturday afternoon, in the plaza directly across from Twin Parks, Bronx-based U.S. Army recruiter Sgt. Michael Illidge had set up his van full of donations on behalf of his chapter of the Ruff Ryders motorcycle club. He’d had a lot of takers, he said, but added, “Some people are just waiting for funding so they can start over.” At this point, the amount of material donations – clothing, food, household items – may have reached saturation point. Some organizations now only accept certain types of goods – or not at all, as is the case with GYO, which posted a sign on the door refusing additional gifts.

Yet, despite all the GYO has achieved, there are still far more important things that the group and the people it serves are still looking forward to. On the program: answers, responsibility and a certain feeling of security, psychological or otherwise. As Ajifanta Marenah, a master’s student at St. John’s University, folded blue jeans and stacked cardboard boxes with other volunteers, she said they had heard complaints before that the heating at Twin Parks remained below average for returning tenants. “This community has always been overlooked,” she said. The owners of the property have yet to face any official investigation into the heating conditions or the faulty doors, and no complete overhaul of the building has been announced. even if so, GYO staff said many residents would be too traumatized to return to Twin Parks anytime soon. Displaced tenants, some living in nearby hotels, have approached the organization for help finding longer-term housing, and their numbers could increase if the city closes a temporary service center nearby. this week, according to rumour. “We need to keep this resource center open 24/7,” Mareneh said.

“Because we’re black, because we’re immigrants, we’ve always had to fight for ourselves,” she added. “We are still fighting.” For now, the group can only do its best for the people in its care. This includes volunteers who add social media advocacy to their long to-do list. During a short break, chatting over foil takeaway plates, Jaharai Sillah half-joked that the group should open a real Gambian restaurant in the area, serving national specialties like domoda, a rich stew peanuts. (It turns out that no one in the group really knew how to get there.) The hour was getting late, but the mood had improved. “We have to be a bright place,” Sillah said.