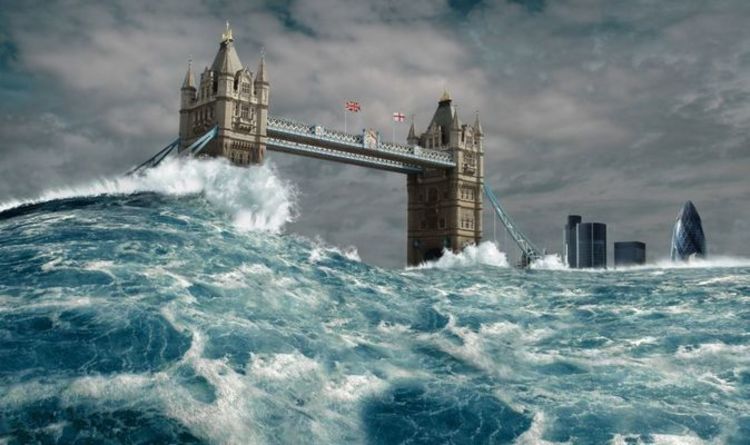 A tsunami is a series of large waves in a body of water, usually an ocean or a large lake, caused by the displacement of a large volume of water. They are usually made up of a number of waves when they arrive in what is called a “wave train”. They can be several meters tall and cause devastating destruction.

One of the deadliest natural disasters in history was the Indian Ocean tsunami in 2004, which left at least 230,000 dead or missing in 14 countries.

This tsunami was caused by a 9.3 magnitude earthquake off the west coast of Sumatra.

However, earthquakes aren’t the only ones that cause tsunamis.

The three Storegga slides are among the largest known submarine landslides in history.

READ MORE: Chinese scientists baffled that new lunar samples do not match those from Apollo 11

Illustration: The tsunami threat to the UK is “much more serious” than scientists originally thought (Image: GETTY)

They occurred on the edge of the Norwegian continental shelf and caused the collapse of approximately 290 km (180 mi) of coastal shelf, amassing 3,500 kmÂ³ (840 cubic miles) of debris.

The resulting tsunami saw a 20-meter-high tsunami heading towards the Shetland Islands off the coast of Scotland.

Researchers at the universities of Sheffield, St Andrews and York found this year that about 600 km (370 mi) of the north and east coasts of Scotland were affected and that water reached 29 km (18 mi) at inland.

Their work, published in a research article in Wiley’s online library, used luminescence to date sediment deposits at the Maryton site in Aberdeenshire.

A tsunami crashes against the coast several times with great speed and force. (Image: GETTY)

The wave of destruction struck over 8,000 years ago and is considered the biggest natural disaster to hit the UK in the past 11,000 years. The displaced water would have affected Doggerland, the land bridge that connected Britain to mainland Europe, and would have had a devastating impact on the Mesolithic populations of the time.

However, researchers at the University of Dundee in Scotland have found evidence of two additional tsunamis, each at least 12m high, thousands of years after the Storegga landslide.

Dr Sue Dawson of the University of Dundee told the university’s website in 2018, as part of the Landslide-Tsunami project: â€œWe found 5,000 and 1,500 year old sands in several places in the Shetland, up to 13 m above sea level. These deposits have a sedimentary character similar to that of the Storegga event and may therefore be related to the tsunami flooding.

The discovery triples the number of known tsunamis recorded in the UK over the past 10,000 years.

The 2004 tsunami devastated much of Southeast Asia. (Image: GETTY)

Professor David Tappin of the British Geological Survey told the BBC at the time: â€œThey’re at a much higher frequency, and 1,500 years ago, it’s very, very recent – it’s 500. AD if you want to think of it like that.

â€œThis means that the danger – the risk – is far greater than we previously thought. And so what we’re trying to do now is define it better.

Professor Tappin’s team will use the data from the deposits to create 3D simulations of the tsunamis and work backwards to locate their sources.

However, making sense of the clues could take decades.

Prof Tappin added that underwater landslides are “much more misunderstood” than other natural hazards.

He said: â€œThey can be much bigger than any landslide seen on earth – the Storegga landslide contained 300 times the amount of sediment carried each year by all the world’s rivers combined.

â€œUnderwater landslides can also occur on slopes of just one in two degrees, and we still don’t know exactly how they start, except that earthquakes are considered the most common trigger.

â€œIt is essential that we learn more. “

His findings suggest that these landslides can occur anywhere in the ocean and do not require a steeply tilted seabed.

Further research and analysis of sediment deposits this year from the aforementioned universities, however, came to a slightly different conclusion.

Mark Bateman, professor of geography at the University of Sheffield, said on the university’s website:, Analyzing soil deposits left by the wave more than 8,000 years ago.

“While there is no similar threat from Norway today, the UK could still be exposed to flooding from potential volcanic eruptions around the world, such as those predicted in the islands Canary Islands.

â€œThese would cause a similar resulting tsunami wave due to the amount of material that would be displaced by the volcano. These models give us a unique window into the past to see how the country has been, and may again be, affected. “