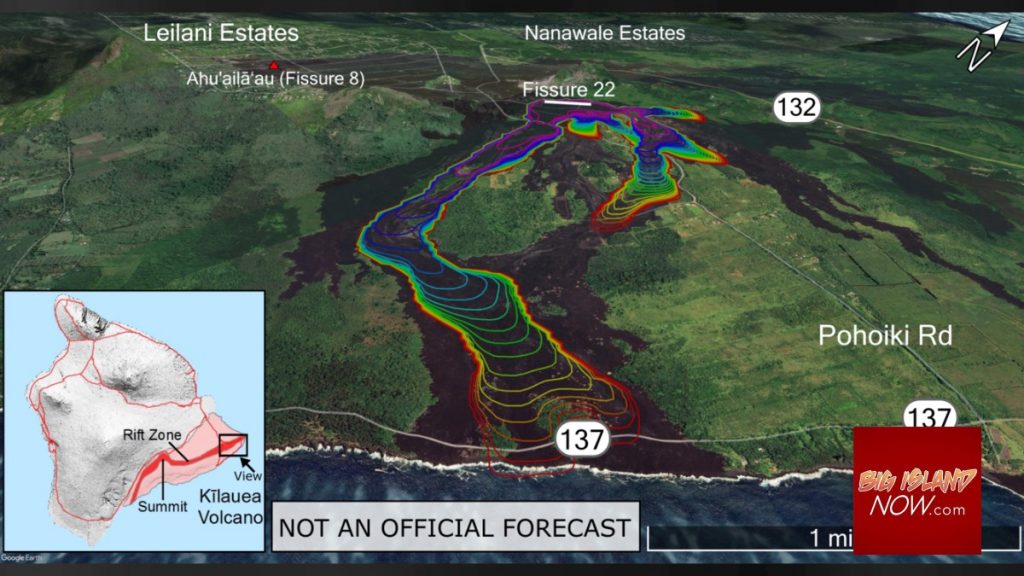 Volcano Watch is a weekly article and activity update written by scientists and affiliates of the US Geological Survey Hawaiian Volcano Observatory. This week’s article was written by postdoctoral researcher David Hyman.

When lava flows erupt on the flanks of Kīlauea or Mauna Loa, Hawaiians and emergency management agencies around the world want to know what to expect.

During the 2018 Kīlauea Lower Rift Zone eruption, lava from 24 fissures inundated over 8,000 acres (3,200 hectares) of land in the Puna District and over 700 structures were destroyed. Sobering numbers like these underscore the need to predict advancing lava flows to aid emergency officials, residents, and USGS Hawaiian Volcano Observatory (HVO) personnel. Highly accurate predictions for other natural hazards such as hurricanes, floods, drought, and even the spread of Kīlauea vog are now commonplace. Can we do the same for lava flows?

The most successful forecasting efforts for other natural hazards rely on the ability to simulate water or air flows. Even though the movement of these fluids is generally much more complex than that of lava, we know much more about water and air than about lava as a material. After all, we can’t see inside a lava flow to observe what’s happening below the surface like we can for water and air.

At the heart of hazard predictions are computer algorithms that calculate the numbers as quickly as possible to make a relevant prediction. After all, a 24-hour severe flood forecast isn’t very useful if it takes 23 hours to make that forecast.

Although researchers have been applying the principles of fluid dynamics to lava flows for over 40 years, most simulations are too slow to use during a crisis when we really want to know the answers to the questions: Where is this lava going and when will it arrive? the?

To help answer this question, HVO scientists have for many years predicted the general trajectory of lava flows using the principle of steepest descent – that the lava flows downward. In many cases, these forecasts have worked very well; however, this method alone cannot answer the second part: “…and when will it get there?” as it only predicts the route, not the final speed or length of the stream.

To help answer these questions, USGS scientists are developing a new lava flow prediction model based on the physical simulation of lava as it flows through actual topography while cooling and cooling. solidifying. This model is designed with simplified but realistic physics, allowing the simulation of 24 hours of lava advance in as little as a few minutes on an ordinary laptop computer.

This research is supported by the Disaster Relief Supplementary Act of 2019 (HR 2157), which has also funded the work of many HVO projects that have been the subject of recent Volcano Watch articles.

THE ARTICLE CONTINUES UNDER THE AD

Of course, we don’t have perfect knowledge or measurements of our model inputs, so a single simulation doesn’t provide much information about our confidence in a forecast. By running the code multiple times with a range of inputs, the collection (or set) of all these patterns can give us a much better idea of ​​the range of possible results. This has been standard practice in forecasting dangerous weather conditions such as hurricanes for many years and is now at the forefront of volcanic hazard research. HVO scientists are investigating how to produce sets using this new model, with the goal of successfully predicting lava flooding in future eruptions.

Although there’s a lot we don’t know about what a volcano is about to do, we can make short-term predictions based on what’s happening right now. These forecasts, even over short periods of time, give people in the path of lava flows the ability to plan, providing critical answers to the questions: “Where is this lava going and when will it get there?”

The Kīlauea volcano is erupting. Its USGS Volcanic Alert Level is at WATCH (https://www.usgs.gov/natural-hazards/volcano-hazards/about-alert-levels). Kīlauea updates are posted daily.

THE ARTICLE CONTINUES UNDER THE AD

Over the past week, lava has continued to erupt from the western vent of Halema’uma’u Crater in Hawai’i Volcanoes National Park. Sulfur dioxide emission rates remain high and were last measured at around 930 tonnes per day (tpd) on September 21. Seismicity is high but stable. At the summit, a brief earthquake swarm and high rates of ground deformation occurred on September 20. No unusual activity was noted along the East Rift Zone or the Southwest Rift Zone. For more information on Kīlauea’s current eruption, see https://www.usgs.gov/volcanoes/kilauea/recent-eruption.

Mauna Loa is not erupting and remains at the ADVISORY Volcanic Alert Level. This alert level does not mean that an eruption is imminent or that progress to an eruption from the current level of unrest is certain. Mauna Loa updates are released weekly.

Last week, about 190 low-magnitude earthquakes were recorded below the summit and upper flanks of Mauna Loa, the majority of them occurring at shallow depths less than 15 kilometers (9 miles) below the sea ​​level. Global Positioning System (GPS) measurements show low rates of ground deformation over the past week. Gas concentrations and fumarole temperatures at the summit and at Sulfur Cone on the southwest rift zone have remained stable over the past week. The webcams show no change in the landscape. For more information on current Mauna Loa monitoring, see: https://www.usgs.gov/volcanoes/mauna-loa/monitoring.

HVO continues to closely monitor the ongoing eruption of Kīlauea and Mauna Loa for any signs of increased activity.

Visit the HVO website for past articles on Volcano Watch, updates on Kīlauea and Mauna Loa, photos of volcanoes, maps, recent earthquake information, and more. Email questions to [email protected].