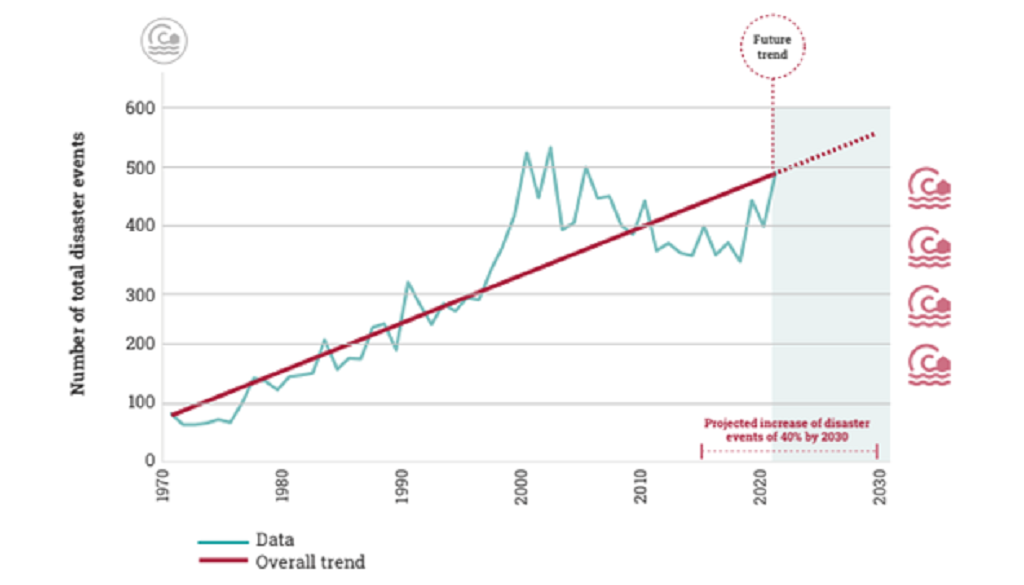 The world will face around 560 disasters each year by 2030, the United Nations has warned in a new report.

The world has experienced 350 to 500 medium-to-large-scale disasters annually over the past 20 years, according to the report released on March 26, 2022. This is five times more than the previous three decades, the Global Assessment Report (GAR 2022) published by the United Nations on March 26, 2022.

Mom mizutoriSpecial Representative of the Secretary-General for Disaster Risk Reduction and Head of UNDRR, said in a statement:

As the mid-term review of the Sendai Framework is underway, this report should be a wake-up call that countries need to accelerate action on the Framework’s four priorities to stop the spiral of escalating disasters.

The burden of poverty will increase

Frequent disasters will increase the burden of poverty in the world, according to the report. An additional 37.6 million people are estimated to be living in extreme poverty due to the impacts of climate change and disasters by 2030, he noted.

According to the UN, a “worst case” scenario of climate change and disasters will push an additional 100.7 million people into poverty by 2030.

The poorest are the most vulnerable and will bear the brunt of disasters, notes the analysis citing the INFORM Natural Hazard Risk Index.

The majority of countries facing high disaster risk are also among those with the highest share of the population living below the national poverty line, he said.

These include the Philippines, Bangladesh, Myanmar, India, Indonesia, Pakistan and Vietnam from the Asia-Pacific region.

About 90% of high-risk countries according to the INFORM Natural Hazard Index are middle- or low-income countries, with an average national poverty rate of 34%.

By comparison, countries assumed to be “low risk” have a poverty rate of less than 1%.

The poor are the most affected because their heavy reliance on outdoor labor such as in agriculture or their reliance on natural capital, both of which are vulnerable to climate change.

With insufficient financial means to adapt, the poorest are the most vulnerable in both developing and developed countries, according to the UN report.

This means that 60% of all catastrophe losses were uninsured. Again, there is a great inequality between developed and developing countries.

Insurance is massively concentrated in wealthy countries, with insurance coverage in most developing and emerging economies well below 10% and sometimes close to zero, despite the greater impact of disasters.

Global warming reaching 1.5 degrees Celsius in the short term will lead to an inevitable increase in multiple climate hazards and pose multiple risks to ecosystems and humans, said the Report of the Intergovernmental Panel on Climate Change Climate change 2022: impacts, adaptation and vulnerability.

Of these, the largest share of economic losses is borne by countries in the Asia and Pacific region, where countries lose an average of 1.6% of their GDP to disasters each year.

Africa is the second most affected region, losing an average of 0.6% of its GDP to disasters, according to the UN.

The first four months of 2022 have been devastating for Africa, which has faced at least six major climate-related disasters, including the recent floods in South Africa, the body noted.

A range of sectors, including finance, government, development, insurance and risk management, can stop this spiral of self-destruction and safeguard the planet’s future in the face of rising risks, suggests The report.

Insurance is a key tool to adapt to rebuild after disasters, the report says. It is a wake-up call to adapt to the “climate emergency” by better estimating disaster losses and insuring them.

The report’s recommendations were based on Glasgow Pact of the 26th Conference of the Parties to the United Nations Framework Convention on Climate Change which called for doubling funding to help developing countries adapt to the impacts of climate change and build their resilience.

‘Failure of climate action‘ has been identified as the number one global risk with potentially the most severe impact over the next decade, according to the World Economic Forum.

“The world must do more to integrate disaster risk into the way we live, build and invest, which is driving humanity into a spiral of self-destruction,” said Amina J Mohammed, Deputy Secretary General of United Nations in its statement.

Lack of data will be a major obstacle to tackling risks that are not well measured, the UN report warns. “Basic data collection systems in most countries are not yet able to fully track the extent of disaster damage and loss, the organization noted.

There is also a need for governments and the financial sector to improve accounting for financial assets at risk under various future climate change scenarios. Financial systems, including insurance, need to be reworked to take into account the real costs of risk, especially long-term risks, according to the UN.

We are a voice for you; you have been a great support to us. Together, we are building independent, credible and fearless journalism. You can still help us by making a donation. It will mean a lot to our ability to bring you news, insights and analysis from the ground up so that we can effect change together.